Relatively simple reforms can make room for some long-term goals while also helping to change the dialogue between citizen and government. A system based on equality, freedom, soft power and collective cooperation should be brought to strengthen liberal democracy.

After the fall of the Berlin Wall and the Soviet Union, the world order almost for the first time in history began to experience a taste of unipolar world. In 1979, the United States became the sole dominant power in all parts of the world, liberal democracy became the leading ideology, and the liberal economy reached its peak. Francis Fukuyama, a political analyst, called it an era of liberal democracy. He believed that liberal democracy was the solution to all problems and that there would be no war, to which he referred end of history. Liberal democracy enjoyed a lot of successes, more than half of the world entered into the sphere of American hegemony.

Roots of liberal values can be traced back to the enlightenment but last couple of decades had been a time of its triumph. However, we may soon see the decline of liberal democracy. World Order is in process of change. Power is shifting. We will soon witness America’s fall. Liberalism isn’t looking in a position to maintain its hegemony.  Liberal democracy is a great for a state if it has economic stability. Liberal democracy’s free market slogan and capitalist nature has systematically pushed back to the common people.

People’s unwillingness towards democracy is increasing day by day. Growth has slowed over the past few decades, inequality has increased, and social mobility has declined, especially in the United States. It has made life more insecure for the working and middle class. Liberal democracy has spread economic risks, fear of future and social divisions throughout western societies. Although the ideas of Western liberal democracy encompass a certain kind of universal framework, that is, individual freedom as a universal feature, the reality is very different today in many parts of the developing world. This is because freedom and democracy are in dialectical opposition to each other. The West mistakenly combined the two ideologies, and failed to recognize that liberal democracy merely leads to the institutionalization of freedom. Its framework is full of conflicting ideological ideas. Politically, liberal democracy is seen under attack from all sides. It has both external and internal threats. In last few years liberal democracy seems vulnerable in front of authoritarian, totalitarian and conservative regimes including Russia, China and Iran.

For the first time in near history, even not a formal democracy is going to replace liberal economy. China and its BRI are major challenge in the way of liberal democracy. China is too confident in prevailing over USA’s dollar. China and its global infrastructural development projects in different states are increasingly disturbing Liberal democracy’s influence. Power is shifting from West to East. America isn’t looking in a position to counter Chinese economic triumph. America’s withdrawal from Afghanistan created another series of chaos unfavorable to American supremacy. However, major threats to liberal democracy are liberal democracies themselves. In his book, People vs. Democracy, Yascha Mounk says that liberal democracy is falling apart. On the one hand, we see the rise of “illiberal democracies” – governments that claim to represent the “real” people of the nation, but have little respect for individual rights or constitutional principles. Many people call these movements ‘populists’. At the same time, others have tampered with what Mink calls “undemocratic liberalism”, a form of government that protects rights but at the expense of democratic engagement and accountability. Think of it as a government by elite technocrats who have little confidence in the common man. He also affirms that under illiberal democracy, democracy is very weak: social bonds and economic security are sacrificed on the altar of individual freedom. Under the latter, liberalism is very weak: power is seized by demagogues, who rule in the name of an angry majority, or at least a significant minority, who are said to be “real people.” Undemocratic liberalism ends with the rule of the elite. Liberal democracy ends in an independent government. Rising wave of populism in liberal democracies is creating a vulnerable situation for liberal democracy. Incompetent leaders, corruption, growing inequalities, changing ecology, and economic crisis made an easy passage for populism to grow. Populism’s “The real people” slogan encouraged common people to oppose elites and capitalism.  Duterte’s Philippines, Viktor Orbán’s Hungary, Benjamin Netanyahu’s Israel, Erdogan’s Turkey and Modi’s India are very democracies creating crisis for democracy. They are populist regimes who may create even more hurdles for democracy in future. Muddle says about Populists that Populists are dividers, not uniters, They split society into “two homogenous and antagonistic groups: the pure people on the one end and the corrupt elite on the other,” and say they’re guided by the “will of the people.” The United States is what political scientists call a “liberal democracy,” a system “based on pluralism—on the idea that you have different groups with different interests and values, which are all legitimate,”  Populists, in contrast, are not pluralist. They consider just one group—whatever they mean by “the people”—legitimate. Surprisingly, America itself was on verge of populism under president Trump.  From Brexit, the referendum that kicked the UK out of the EU, to Trump’s election predicated on “draining the swamp” in Washington and making “America Great Again”, the sudden rise of populist nationalism shook the US and Europe in 2016. 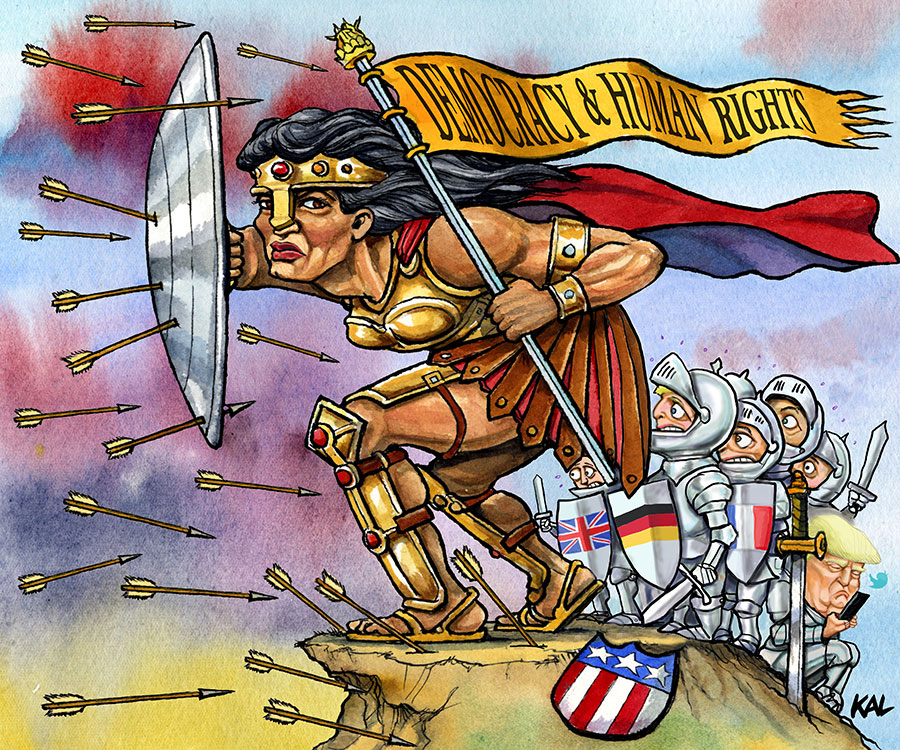 Trump was the leading populist, who clashed with democratic institutions during his presidency. Unexpectedly, it happened first time in America that a president refused to deliver the power. Whenever he ran against the limits of his constitutional authority, he denied that anyone else – a judge, a bureaucrat, or a member of Congress – could tell him what to do. In his mind, he only had the right to speak for the country. Trump’s belief of being only true representative of people led him not accept the result of a election which he lost and guided him to incite a mob to enter in people’s house rejecting results of election. He left anti-democratic impression in world politics which may encourage other leaders to follow same path in order to get people’s favor and attain power. However, wholesale change is not needed to bring liberal democracy out of its funk.

Relatively simple reforms can make room for some long-term goals while also helping to change the dialogue between citizen and government. A system based on equality, freedom, soft power and collective cooperation should be brought to strengthen liberal democracy. Facing external threats is not enough to save liberal democracy. We must also continue to practice our preaching.