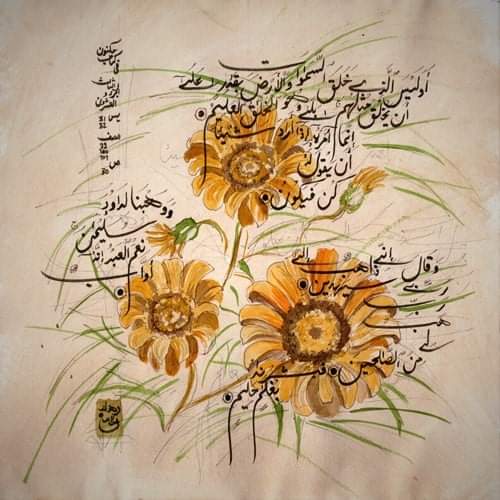 Believers distribute the recitation of the verses of the thirty parts of the Holy Qur’an on the days of the holy month of Ramadan. It is a reading of contemplation, inspiration for revelation, seclusion of meanings and closeness to the Creator God. It is also following the example of the Sunnah of the Prophet Mohammed, may the best prayers and peace be upon him. So what does the Egyptian academic artist Reham Mohsen present in her (artistic) reading of the verses of the Holy Qur’an? 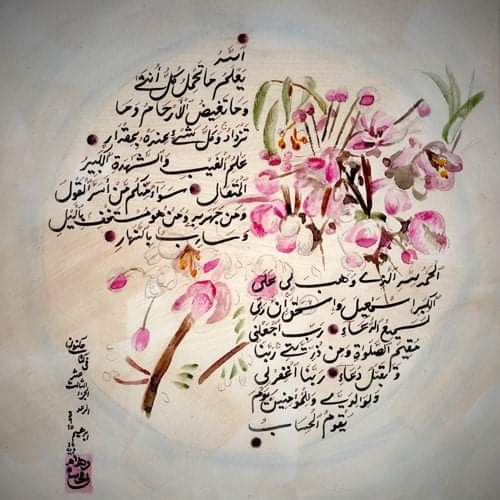 She continues her journey that began last year, when she chose to draw verses from the Holy Book, and wrote that Ramadan is the Qur’an – The holy month of Ramadan in which the first revelation of the Quran took place.

This time I chose to write Arabic calligraphy with the recitation. I chose from each part a verse for each day in Ramadan. We will always learn and draw from the Qur’an. I belief in the unseen and not explicit evidence, and the rulings are properly understood by studying the whole verses, but rather by studying what came before and after it.

God is able to make our life a paradise, but it is a test bed. How many clear answers to our questions are provided by the Qur’an but we do not read, and how many secrets treasure that was preserved in hearts through recitation and prayer long before it was written…. This year, she returns to her art work of faith through a journey of writing by drawing that gave her a title “in a Preserved book” (Fi Kitaben Maknoon), beginning on the first day with the verse 132 of Surat Al-Baqarah, she says: Every day in Ramadan, God willing… Ramadan is the beautiful… welcoming the crescent of a blessed month.

For the second year, after “Ramadan in which the Qur’an was revealed”, in 2020, she started “in a Preserved book” (Fi Kitaben Maknoon) (1442 AH) 2021, it is that book; the support and supply, the good stories and hidden treasures, in the book of Maknoon…

Between the square space of the paper and a circle in its center that fills with the formation, that is, between two strict geometric shapes, she brings us to a world of soft delicacy, with the captivating Arabic lettering, and the delicacy of fresh watercolors, these are the colors that accompany us in our isolation and we – as all the sons and daughters of humanity in the year of the epidemic – suffering from our loneliness, they come with verses to take us into a magical world, whose consistency is mostly roses, as if they were alternate roses of paradise, and blissful flowers to come, after the hell of disease and plague and the anxiety of the consequences of this suffering.

Despite breaking the strict geometry in favor of art by evoking the spirit of beauty in the substance and the component, we live with the sight of each painting with parallel eloquence, in which we find counterpoint and alliteration, and we find in it a balanced color rhyme, and we encounter it with the column of poetry, as if roses sometimes have punctuation and form linguistic marks. And do not forget to reuse a background drawn from the color of papyrus, which evokes history with its originality, as if writing a document with drawing, in which is the sacred and the worldly, and in it the two alphabets of the written and drawn languages. In it, history and geography circulate in all these gardens of different plant species.

It is an invitation to contemplate, and to restore the art spirit with which we read our lives, at a time when we desperately need to read the Noble Qur’an with mind and heart, with vision and insight. 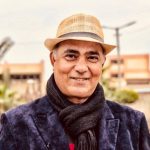 Ashraf Aboul-Yazid is an eminent Egyptian writer, poet, novelist, journalist, analyst and Editor-in-Chief of Silk Road Literature series. He is author of around three dozen books. Many of his books have been translated in various languages of the world.

Arizona, and beyond the shores of pacific

A peek into the Sindhi business community of India 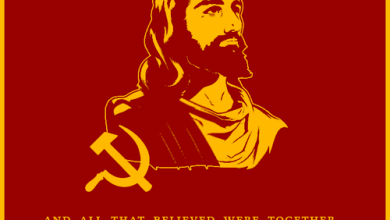