The Center aims to strengthen skills development for youth and teachers of the province. The project is funded by EU, German and Norwegian governments.

A state-of-the-art Centre of Excellence (CoE) in Modern Technologies at Hub, Balochistan was inaugurated on Wednesday to strengthen skills development for youth and teachers of the Province.

The CoE aims to foster excellence in developing training programs for youth and train practitioners in Technical Vocational Education and Training (TVET) sector with an ultimate goal to build a competent workforce with better job opportunities. The CoE will be pivotal in implementing a cascading model of teachers’ training and imparting skills training for trainees through modern lab facilities, career counselling and job placement services – all under one roof.

The Centre is the result of an up-gradation of the existing TVET center in Modern Technologies Hub which has been supported by a TVET Sector Support Program and funded by the European Union (EU), the German Federal Ministry for Economic Cooperation and Development (BMZ) and the Norwegian government. It is implemented by Deutsche Gesellschaft für Internationale Zusammenarbeit (GIZ) GmbH in close collaboration with the National Vocational &Technical Training Commission (NAVTTC), Technical Education and Vocational Training Authorities (TEVTAs) and a number of public and private sector organizations at national and provincial levels.

The program is supporting the establishment of five Centers of Excellence across Pakistan.

Out of these, two are already completed in Peshawar and Islamabad, while the other two at Lahore and Kotri are nearing completion. 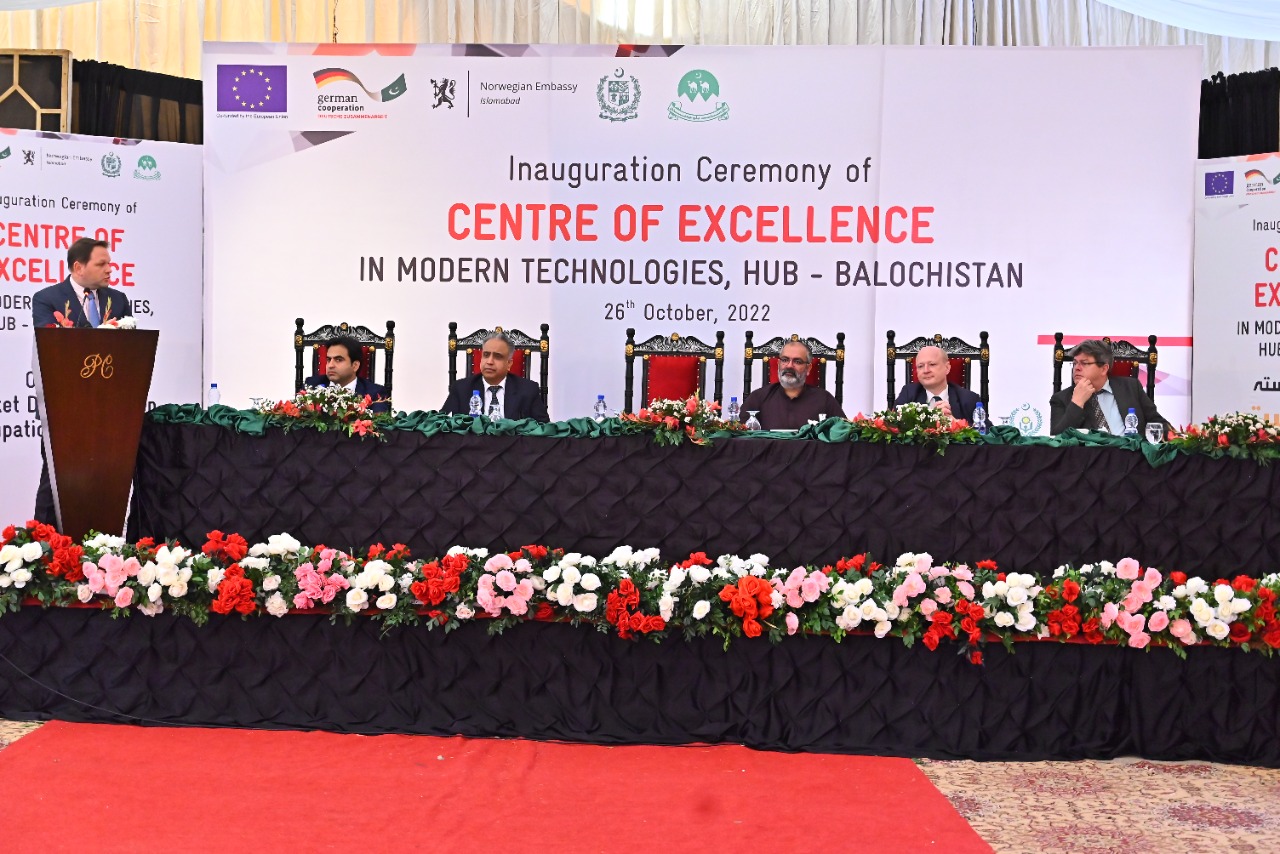 The CoE Hub Balochistan was presented to the Government of Balochistan in the presence of  Nawabzada Gohram Khan Bugti, Advisor to Balochistan Chief Minister on Labor and Manpower, Secretary Labor and Manpower Tariq Qamar were present on the occasion were various development partners and a number of other representatives from public and private sector.

While addressing the ceremony, the Advisor to the Chief Minister remarked that “The inauguration of this center of excellence is a big achievement for the overall TVET sector of the country particularly for Balochistan. This CoE, he added, will support training of trainers and trainees in modern technologies which will ultimately equip the trainees to compete in the national and international labor markets”.

In his remarks, Secretary Labor and Manpower Department Govt. of Balochistan  said: “We are overjoyed that the CoE is now complete and being handed  over to the Government of Balochistan which will set an example for rest of the country in providing outstanding training to instructors and trainees.”.

Mr. Ovidiu Mic, Head of Cooperation of the European Union Delegation to Pakistan said that the EU considers TVET as a priority sector for the socio-economic development of Pakistan and has supported the TVET policy and reform process for over a decade.

“The establishment of the Centre of Excellence in Hub, is one of the key concrete achievements of our support. We expect that it will become the benchmark for all other institutes in Balochistan in aligning TVET in the province with the international standards,” he further added.

On behalf of the European Union Delegation to Pakistan, he congratulated the youth of Balochistan on having this facility in the province. 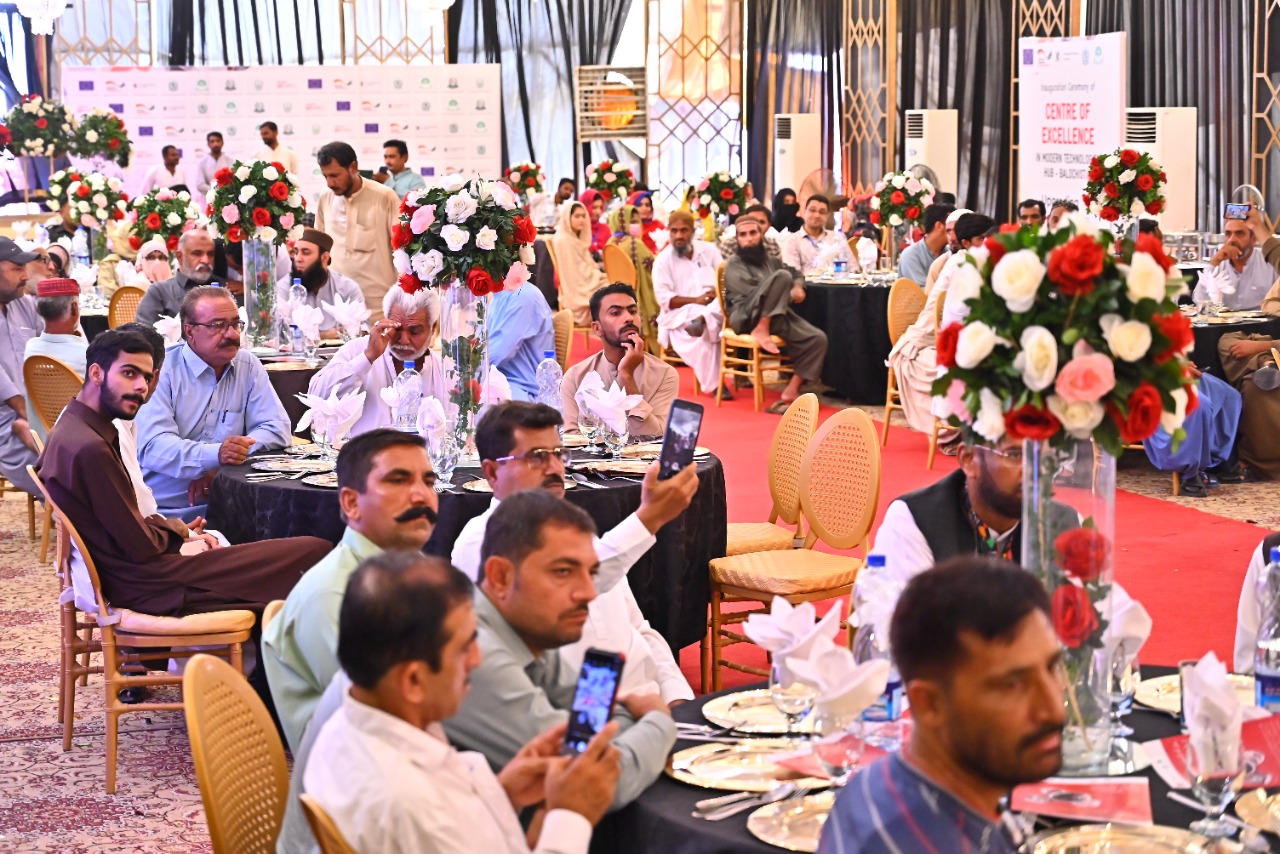 Dr. Rüdiger Lutz, Counsul General of the German Consulate, Karachi said that “The COE, equipped with modern technology labs will play key role for the province in training its teachers and students”.

On behalf of the German government, he expressed: “I see a great potential in the Centre of Excellence for equipping youth with entrepreneurship skills besides paid jobs.

Speaking at the ceremony, Mr. Olaf Handloegten, Cluster Coordinator and Head of TVET Sector Support Program, GIZ said that, “We hope that the management of the center will take advantage of the upgraded training facility for both TVET teachers and trainees and devise mechanisms to ensure that this CoE lives up to its full potential. Now it’s the time for the provincial government, NAVTTC and private sector of the province to ensure sustainability of these efforts and achievements.”

The event was attended by public and private sector representatives, relevant TVET bodies, teachers and students of the CoE. (PR)