Habba Khatoon, born around 1554 in the small village of Chandrahar in Kashmir, Habba Khatoon is remembered as one of the great mystic poets of her era and was called Zooni (translated as the moon) because of her great beauty. According to another account she was born in small village Pampore, Pulwama in Jammu and Kashmir.

She is considered one of the great influences on Kashmiri culture and her songs and poetry are still popular within the region today. 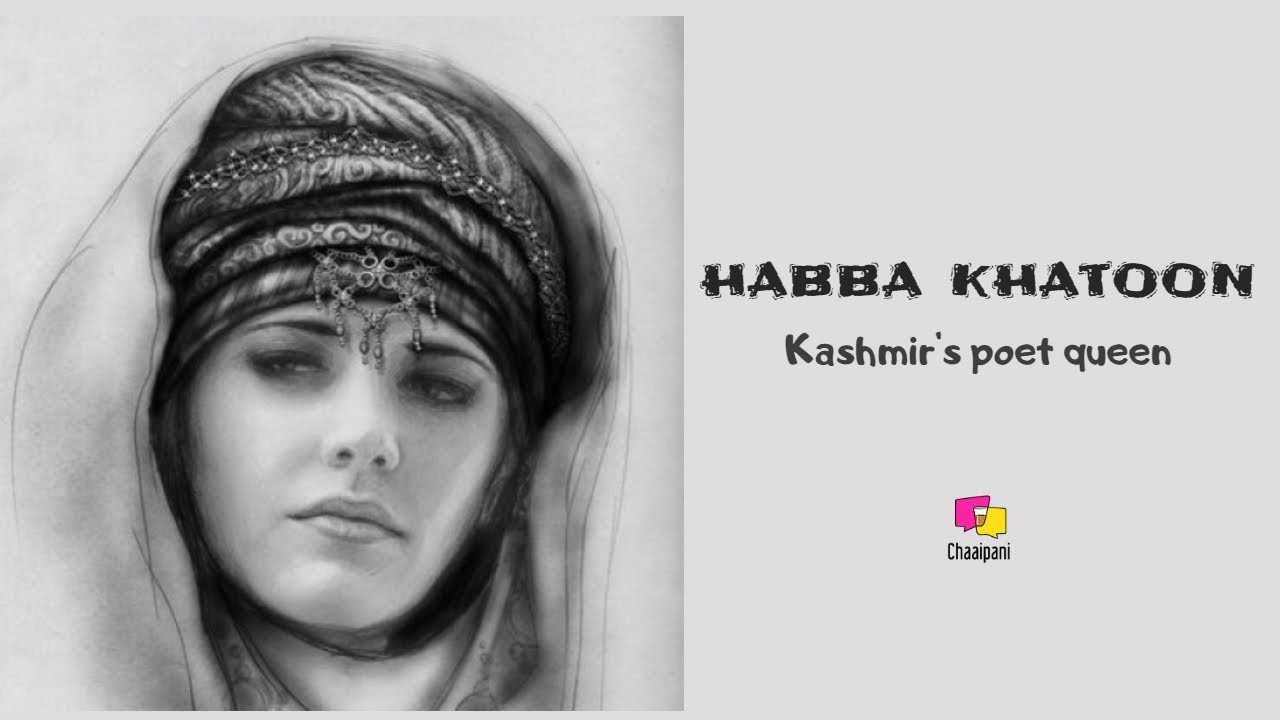 Unlike many of her friends and family, Habba Khatoon was unusual in that she learned to read from an early age, primarily with the help of a local moulvi. Her attraction to poetry caused friction amongst her family, especially when she married and her sister-in-law and mother in law both tried to bully her into a ‘normal’ life. This led to the first marriage breaking down and ultimate divorce with Habba Khatoon being returned to her parents.

Later, one day Yousuf Shah Chak was out hunting on horseback when he heard Zoon singing under the shade of a chinar tree, and the couple met and fell in love. The oral tradition describes Zoon as Yousuf Shah Chak’s queen consort, although there is scholarly debate about whether she was in fact a lower status mistress or member of his harem. She entered the palace in about 1570, and at some point changed her name to become Habba Khatoon. 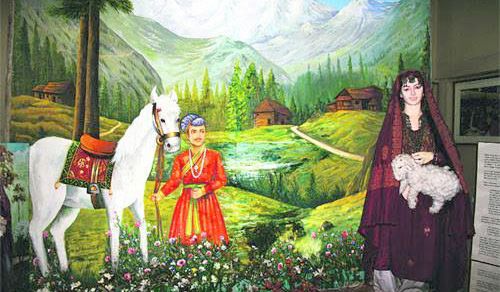 The couple was reportedly very content, and Yousuf Shah became the ruler of Kashmir. However, they were separated in 1579 after the Mughal emperor Akbar had Yousuf Shah arrested and imprisoned in Bihar, never to return. After this, Habba Khatoon became an ascetic, and spent the rest of her life wandering across the valley singing her songs.

Habba Khatun composed songs in Kashmiri. It is claimed that she introduced “loal” to Kashmiri poetry. “Loal” is more or less equivalent to the English ‘lyric’.

From the very beginning, Habba Khatoon rebelled against the poetic norms of the day that many of her male counterparts adhered to. Most of the poetry written at this time was spiritual and often suffocating in its concentration on the individual rather than society as a whole.

What she tried to do was put down her true thoughts and feelings and her verse is often seen as a mixture of sweetness and enduring pathos that many found reached them on a personal level. Another factor in her success was also the fact that she was from a peasant family but began to rise in standing, particularly when she came to marry the last king of the Kashmiri region, Yousuf Shah Chak.

Another account says when Yousuf Shah was forced to flee by the invading Mughal king Akbar, Habba Khatoon went with him, spreading her poetry and songs as she traveled, ensuring that they would survive through word of mouth for centuries to come. The historical accuracy of her life has often been doubted over the years and there are some reservations about the number of songs that are actually attributable to her.

Some historians have said that Yousuf Shah Chak was so impressed by her poetry that he admitted her into his harem but did not marry her. According to literary scholar Shri Amin Kamil only twenty songs can be truly attributed to Habba Khatoon but Kashmiris have attached her name to many poems over the years and these have been printed in great numbers.

The two main influences on her poetry have been the failure of her first marriage and her relationship with Yousuf Shah Chak, particularly the period when he was sent away in exile to Bihar. Her songs talk of earthly love and are more pragmatic in tone and less spiritual than those of her peers at this time in the sixteenth century.

Her candidness and lack of compromise was considered different for the time and she was, at some point, given the name of the ‘nightingale’ of Kashmir. Many of her songs were about the sorrow of separation and had a new lyric quality and live on to this day. There is debate over when Habba Khatoon actually died but it is thought to have been around 1609 when she would have been in her late fifties.

Habba Khaton’s grave is said to be in Athwajan area on the outskirts of Srinagar but some researchers says that Habba Khatoon was in fact buried at Biswak village in Nalanda, Bihar alongside the grave of her husband, Yusuf Shah Chak.

After she became separated from Yusuf Shah Chak, Habba Khatoon composed soul-stirring poetry which earned great popularity in the Valley. Here is some of the poetry that Habba Khatoon wrote after her separation from her husband:

I do all this in vain!

I shed incessant tears for you; I am pining for you,

Why don’t you seek me out?

The shock of your desertion has come as a blow to me, O cruel one, I continue to nurse the pain.

I have not complained even to the spring breeze That is my agony.

Why have you forgotten me?

Who will take care of me?

I swear by you I do not go out at all, I don’t even show up at the spring.

I, Habba Khatoon, am grieving now.

Why didn’t I ever greet you, my love?

The day is fading and I keep recalling, why are you cross with me?

Rain has come, and fields and fruit trees sing,

Spring has come, and Love, the Lord of Spring,

Dandelions have lifted up their faces,

Cold has gone and every wintry thing!

Iris and the lily spring will bring.

Winter’s ashes from our door I fling!

The water bird the lake embraces,

How can frost upon your petals cling?

In henna I have dyed my hands,

When will he come?

I die, while he roams distant lands,

My heart is numb!

O, where is now the day’s delight?

The golden wine cups of the night

The ritual of love is sweet,

My love with jewels, perfume his feet,

Be no more torn,

Anoint him with my fragrant kiss,

Love, for your sake,

The lotus of my heart in bliss

Would block the lake!

Meadows I cover with flowers for you,

Come, my lover of flowers!

Come let me gather fresh jasmine for you,

Lilacs have bloomed by the river for you,

Deeply the world is asleep,

Still, though, no answer has reached me from you,

Garlands of green I keep.

What if they speak only evil of me?

Who has been able to change destiny?

Come, my lover of flowers! 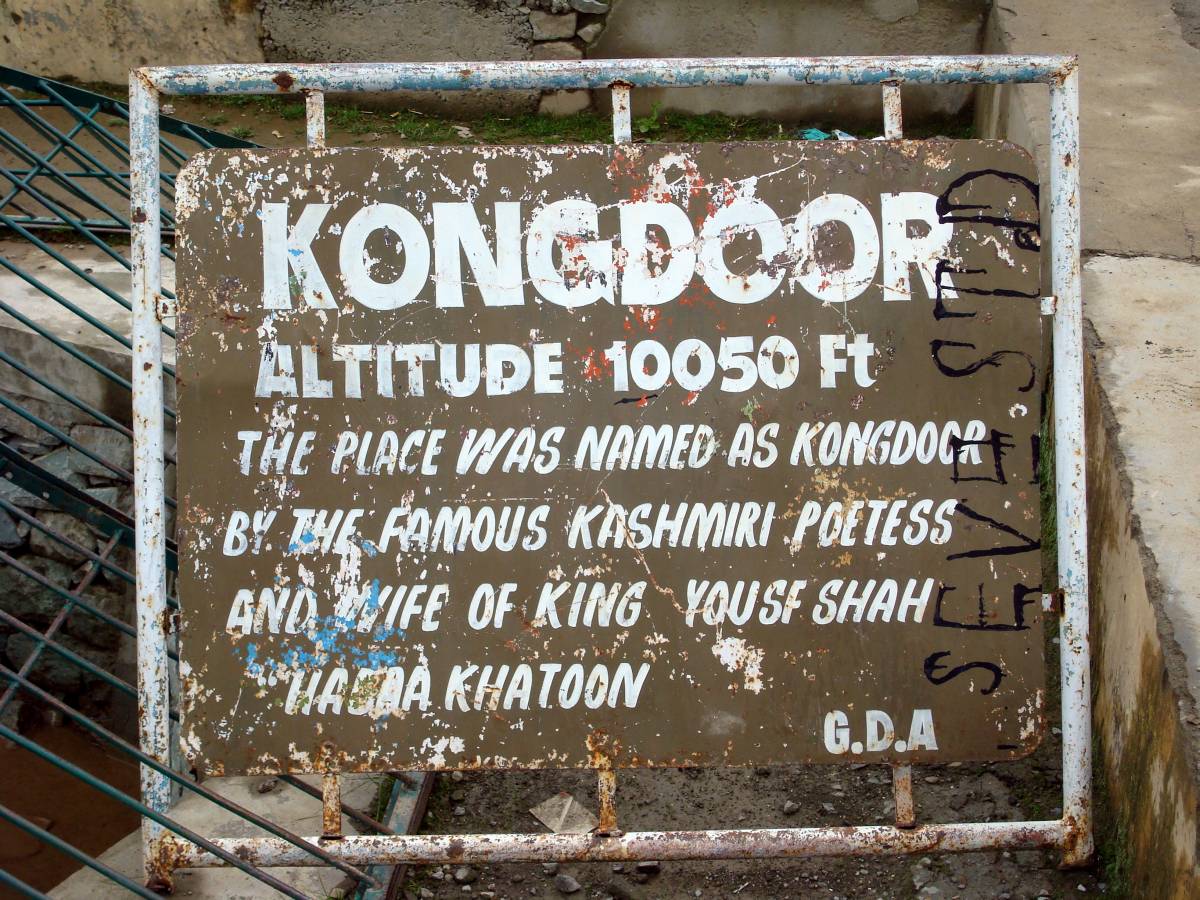 An underpass in Mughalpura, Lahore has been named after Habba Khatoon. Indian Coast Guard named a ship as CGS Habba Khatoon after her.

Habba Khatoon (1978) is an Indian Kashmiri-language television film directed by Bashir Badgami for Doordarshan. It starred Rita Razdan in the titular role of the queen. Doordarshan also aired Habba Khatoon, another television show in Hindi on DD National about the poetess.

Mrinal Kulkarni portrayed her role in the Indian television series Noorjahan, which aired on DD National from 2000-2001.

Zooni is an unreleased Indian Hindi-language film by Muzaffar Ali that was supposed to release in 1990 but was eventually shelved. Earlier unsuccessful attempts in Indian cinema to portray her life on screen included one by Mehboob Khan in the 1960s and in the 80s by B. R. Chopra.