Sindh Chief Minister Syed Murad Ali Shah on Sunday constituted a committee to study ways and means to boost agriculture sector in Thar and give their recommendation for promoting organic fruit, vegetable and milk industry.

The committee, headed by his Advisor Agriculture Manzoor Wassan, would consist of experts of TandoJam Agriculture University and local agriculturists.

The chief minister took this decision in a meeting with growers and traders held to listen to their issues.

The growers said that in 24 union councils of Thar the groundwater was sweet and could be used for agriculture purposes. They said that they have made different experiments of growing onions, tomatoes, Brengle, lady fingers and other vegetables and fruits like lemon, oranges, guava and various others.

They suggested submersible pumps with a diameter of 1 to 2 inches to irrigate the lands. According to them this would turn out to be an agricultural revolution in Thar.

The chief minister directed Chairman P&D Hassan Naqvi to prepare a scheme of 500 submersible pumps for the people of Thar. “This scheme must be prepared at the earliest so that it could be approved and launched shortly,” he said and directed the agriculture department to send the scheme to the P&D.

Shah said that Thar has a great potential to grow organic vegetables, fruits and organic cows, camel and goat milk which has a vast and rich international market.

On the recommendation of the lawyers who called on him at DC House directed the Senior Member Board of Revenue to prepare a plan to survey the lands of Thar.

Murad Ali Shah taking notice of cutting of trees directed deputy commissioner Mithi to stop it and asked him to grow more trees, including fruit trees to increase the population of birds in the desert.

The CM said that Thar seemed to be a beautiful district with metal roads penetrating through sand dunes. “If trees are grown along the roads, they would not only add beauty to the overall view of the area but would develop a healthy environment,” he said.

Reviewing the development portfolio of Thar at Darbar hall of the DC office, Mithi, the chief minister directed the Energy and local government department to functionalize all the nonfunctional RO plants by resolving all the outstanding issues.

The MNAs, MPAs and other elected people of Thar told the chief minister that some of the connecting roads needed repairs for which the CM directed the works department to undertake repair works. 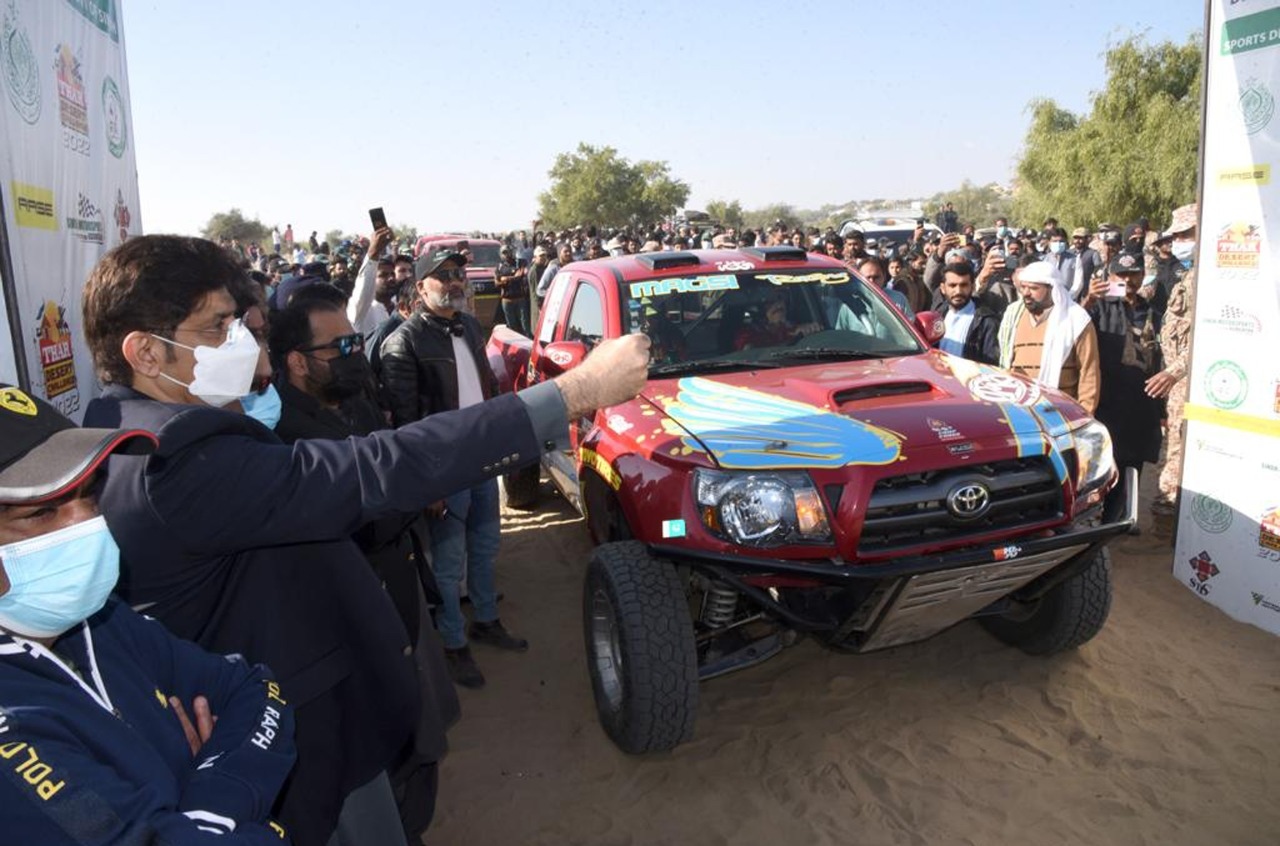 Murad said that the performance of the federal government in respect of socio-political and economic stability is negligible, and they have spent their over three-year tenure in abusing, accusing, and blaming their opponents because right from the very first day they are suffering from insecurity and inefficiency.

This he said while talking to media just after performing flag off for Thar Jeep rally organized by Sindh Sports department at the desert, near Mithi. He was accompanied by Minister Energy Imtiaz Shaikh, Minister Local Government Nasir Shah and others.

Shah said that the growers have told him that due to the crisis of urea wheat has not been sown to such an extent as was being predicted. “We will have to take extraordinary measures and encouragement to grow wheat in the kutcha area so that next you Sindh may have bumper crops,” he said.

Talking about Jeep Rally organized by provincial Sports department, Shah said that racers from all over Pakistan have participated in it. “We have decided that in every winter three festivals, sports, cultural and musical events would be organized in Thar to boost its tourism-based economy,” he said. (PR)

Why Muslim girls are forced into early marriage