The name and a biographical note along with a photograph of Mahirwan Mamtani has been placed in a book ‘EUIndia60 Legends Coffee Table Book’ released recently at EU Parliament.

The Sindhis around the world would be overwhelmed with a feeling of great pride that the octogenarian world famous artist Mahirwan Mamtani has been recognized as one of the 60 legends of Europe and India.

The name and a biographical note along with a photograph of Mahirwan Mamtani has been placed in a book ‘EUIndia60 Legends Coffee Table Book’ published recently. The book was released recently at the European Parliament by Mr. Soren Gade, Member EU Parliament Denmark/Chairman EU Delegation for Relations with India. It was released in the presence of EU Parliament Member from Germany Ms. Svenja Hahn, Invest India CEO Mr. Deepak Bagla and IIM Shillong, Chairman Shishir Bajoria. 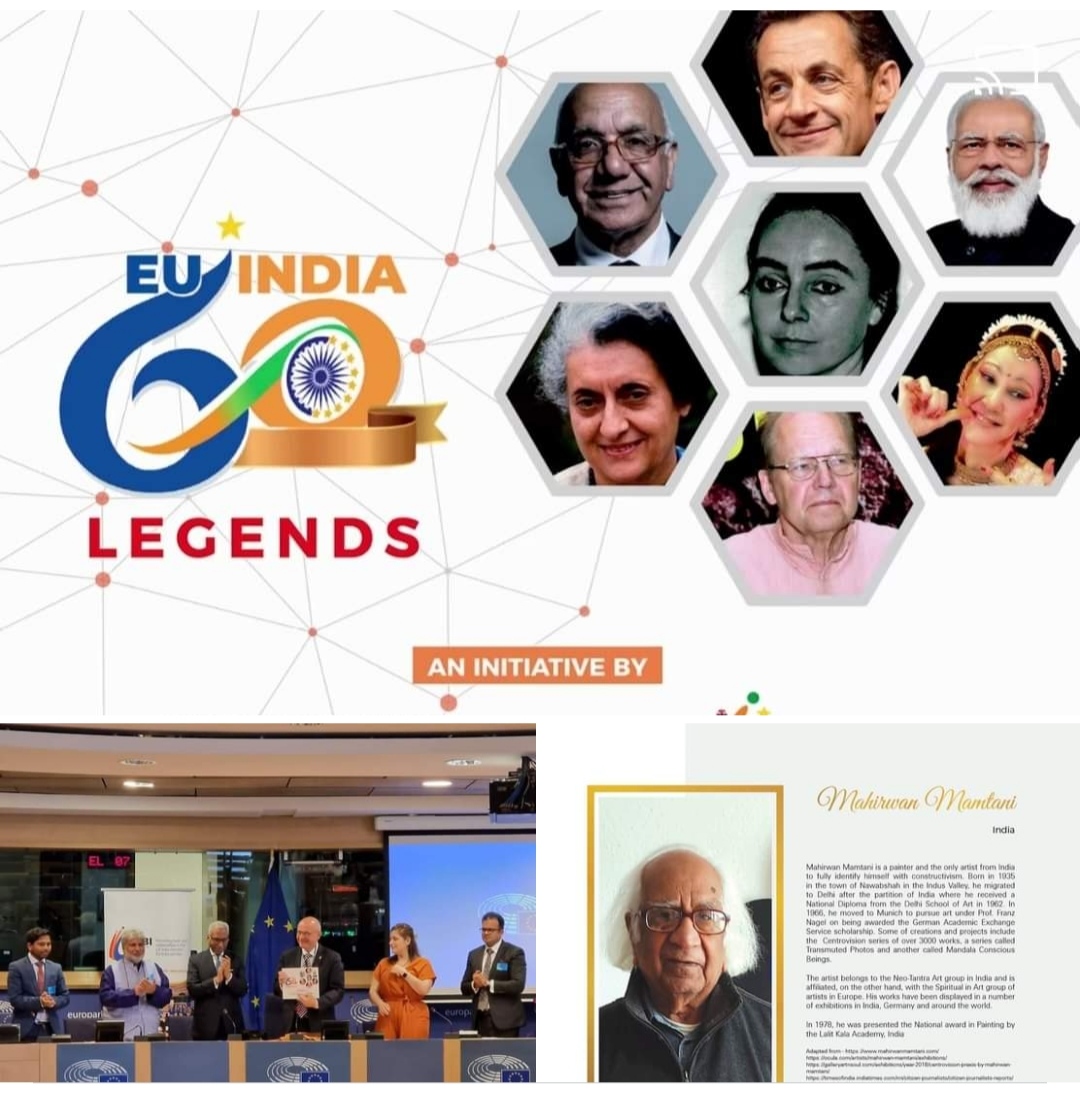 Mahirwan Mamtani’s name is among 60 legends that include Jawaharlal Nehru, Mrs. Indra Gandhi, Attal Bihari Vajpai, and some other personalities of India besides European leaders.

Born on November 2, 1935 in Bhiria, a small town of Sahiti district Naushehro Feroze (Formerly Nawabshah district), Mahirwan Mamtani had to migrate to India along with parents in 1947 due to the partition of the Indian subcontinent. Already at the age of six in Sindh, Mahirwan Mamtani began to paint, mainly with charcoal and chalks on walls. Because of miserable living conditions as a refugee, lying on sick bed he taught himself without proper schooling. He used to doodle with pencil or pastels on paper. However circumstances forced Mamtani to earn money doing several jobs and his urge to paint was suppressed due to lack of time and money. After some years of such conditions, loneliness and hard work at self-education, Mamtani besides his jobs started studying for Bachelor of Arts and then joined evening classes at the Fine Arts Department of Delhi Polytechnic to study painting.

The biographical note in the book states that ‘Mahirwan Mamtani is a painter, and is considered as the only artist from India to fully identify himself with constructivism. Born in 1935 in the town of Nawabshah in Indus Valley, he migrated to Delhi after partition of India, where he received a National Diploma from Delhi School of Art in 1962. In 1966, he moved to Munich to pursue art under Prof. Franz Nagel on being awarded the German Academic Exchange Service Scholarship. Some of his creations and productions include the Centrovision series of over 3000 works, a series called Transmuted Photos and another called Mandala Conscious Beings’.

‘The artist belongs to the Neo-Tantra Art Group in India and is affiliated on the other hand with Spiritual in the art group of artists in the Europe. His works have been displayed in a number of exhibitions in India, Germany, and around the world.’

‘In 1978, he was presented the National Award in Painting by the Lalit Kala Academy India’, the note ends.

Mahirwan Mamtani is also the author of some books including his autobiography, and two years back, the Sindh Courier had published excerpts from his book. Some of his works are also placed in Partition Museum of India in Amritsar.

Observations of an Expat: Diagnose First