UK is the largest donor on Family Planning in Pakistan and has been supporting the country since 2012, envoy says addressing the World Population Day program.

Pakistan’s population is going to double in the next 30 years putting a huge burden on its resources, said Christian Turner, British High Commissioner to Pakistan while speaking at a program held to commemorate the World Population Day.

The collaborative event was conducted in Islamabad by the United Nations Population Fund (UNFPA) Pakistan, British High Commission, Ministry of National Health Services, Regulations & Coordination (NHSRC), and Population Program Wing (PPW). The event revolved around the theme “A world of 8 billion: Towards a resilient future for all – Harnessing opportunities and ensuring rights and choices for all.”

British High Commissioner said: “The business-as-usual approach needs to stop. It is important to talk about family planning.” 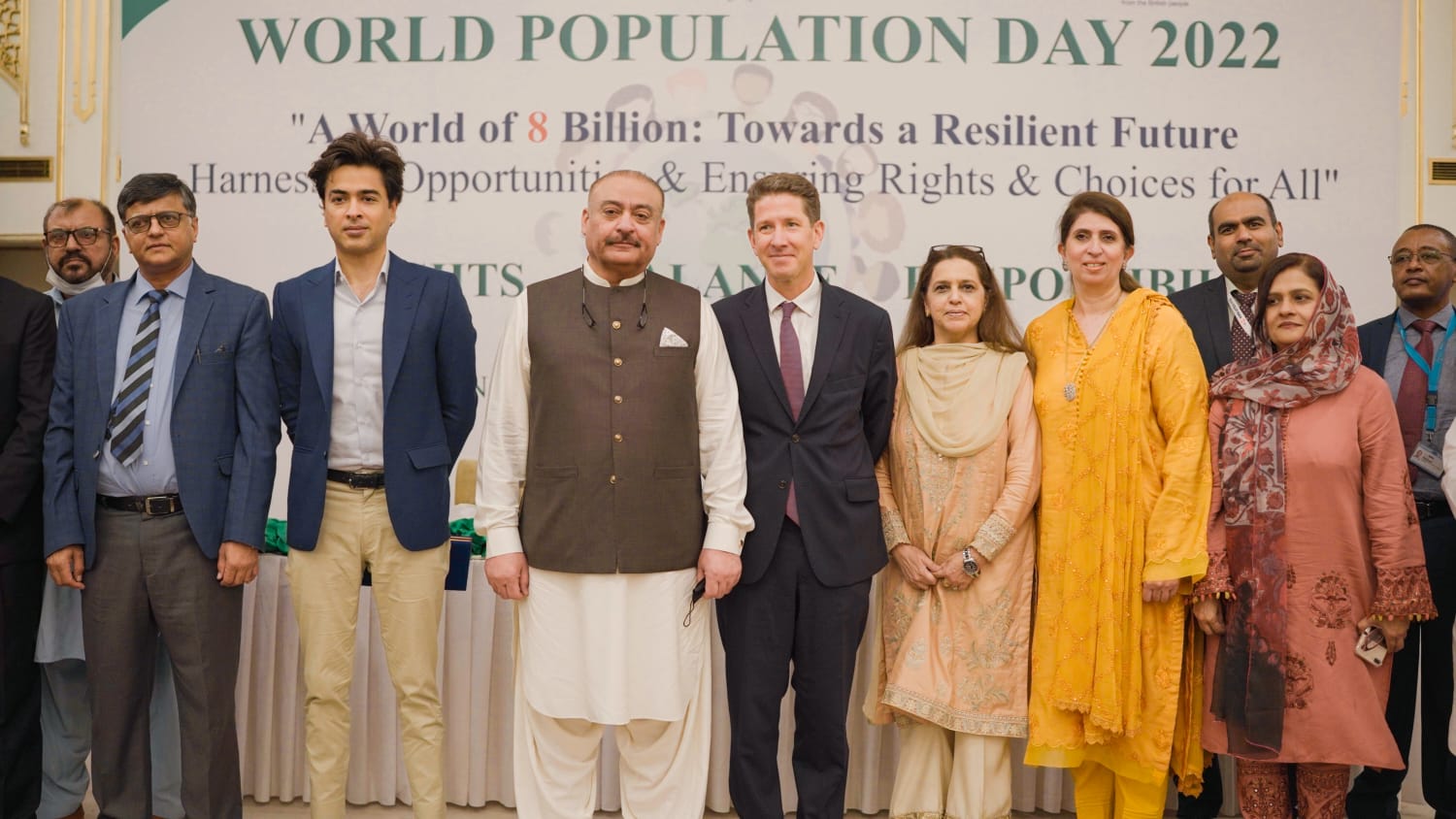 In his address via a video testimonial, Dr. Arif Alvi expressed concern over the constant population growth and the meagre resources available in Pakistan. He said that the government needs to exercise all options to sensitize the public about negative implications of population growth not only on human health, especially of mother and child, but also on economic as well as social life of people.

Abdul Qadir Patel, Minister for Health, remarked that Pakistan’s population is likely to double in the next 30 years. He stressed that all partners and stakeholders including civil society organizations and NGOs should come together and join hands with the government to address this growing issue.

Dr. Sabina Durrani, DG Population, Population Program Wing (PPW), commented that parents have the right to freely and responsibly decide the number and spacing of their children to fulfill the fundamental rights of their children and family by maintaining a Balance between their family size and resources.

“Population is a denominator to every challenge and issue facing Pakistan right now. It is necessary that we dedicate adequate funding for accelerated Family Planning in Pakistan to reap the benefits of demographic dividend” said Dr. Shabnam Sarfraz, Member Social Sector & Devolution, Planning Commission Government of Pakistan. She also remarked that for a progressive and prosperous Pakistan, it is important that we provide equal opportunities for men and women in education, employment, and entrepreneurship.

Country Representative UNFPA Pakistan, Dr. Bakhtior Kadirov called for focusing on every person; on ensuring our world can support our needs & those of future generations, on human rights & on leaving no one behind.

Singer, philanthropist, and brand ambassador for Family Planning in Pakistan, Shehzad Roy encouraged the government to ensure that before a married couple visits the Nikkah registrar to get their marriage certificate, they should be obligated to pass a basic reproductive health course so that they have adequate knowledge about family planning and birth spacing before they begin their married life. “This would not only encourage people to adopt family planning measures but also create awareness in women about their basic rights”, Shehzad added.

The need for family planning remains staggeringly high in Pakistan. The grassroots challenges are present such as misperceptions, lack of trained health staff, communication gap between the partners, and others but if we don’t make a serious change, Pakistan’s population is likely to double in the next 30 years. (PR)