For writing the encyclopedia, Hemachandra had collected the historic manuscripts and literature from the ancient Sharda University of Kashmir.

A Jain friend Vimal Shah rang a few months back from Mumbai to inquire about the ruins of an ancient Sharda University in Azad Jammu & Kashmir (Pakistan-administered AJK). It was a Buddhist Temple that served as a university and had a huge library where the scholars from different regions used to come for study and research, he told me. As I had no knowledge of such a university or its ruins, I called Abid Siddique, my journalist friend in Rawalakot city of AJK, my favorite place for its cold weather even during the scorching summer in June. “Yes, Nasir Bhai, the ruins are located in Neelam Valley. In fact Sharda is the name of a Tehsil (a revenue and administrative unit) and a small town,” Abid said.

“Presently Sharda Peeth, as it is called, is only eight kilometers from the last village of Gurais (Tara Bal) near Line of Control (L.O.C.) between India and Pakistan.,” he said

And now it was my turn to call Vimal Shah and confirm the existence of the ruins of an ancient university. “But what made you ask about these ruins?” He immediately shared a photo of a board erected at the archaeological site of Sharda University, inscribed with a brief history of the ancient institution of learning. “It mentions the name of Acharya Hemachandra, and I am interested in knowing the link between the two – the university and the Hemachandra,” he said.

“Can you please help me with translation? I can see “Siddha Hema Chandra” written in English in the last line. I need to know what’s mentioned about “Siddha Hema Chandra” in this board. My specific interest is in knowing what was the contribution of Hemachandra aacharya in the Sharada University? If his contribution is not significant, his name would not be mentioned on a board put up there,”

“But who was Acharya Hemachandra?” I asked.

“He was a Jain and a great scholar who developed the Gujarati language grammar,” replied Vimal Shah, who had been contributing articles to Sindh Courier on the history of Jainism.

Vimal Shah shared more information about Acharya Hemachandra who was born to merchant parents in 1088 A.D in a town Dhandhuka, 60 miles from Ahmedabad Gujarat. When her mother was pregnant, she had a beautiful dream, which she shared with a sage Acharya Devasuri who predicted that her child would become a great spiritual leader and a famous monk who would glorify the Jain Order.

Believing in what the sage told her, the woman had handed over her son to Jain Monk who named the boy as Somachandra.

Somachandra proved very intelligent and quickly mastered the scriptures, grammar and other education related to Jainism. At the same time, he cultivated excellent virtues like forbearance, tolerance, holiness, simplicity, discipline, chastity, and generosity. Somachandra was incomparable in administration and efficiency. Acharaya Devasuri made Somachandra an Acharya when he was only twenty-one years old. At that time, he was given the name Hemachandra Acharya. “ 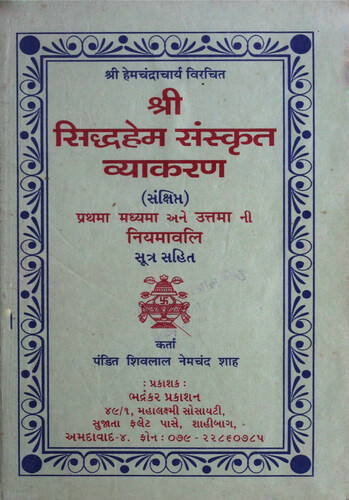 The fame of Hemachandra’s efficacy and knowledge gradually spread everywhere. Kumarapala, the King of Gujarat, considered Hemachandra his spiritual teacher (guru) and gave him the exceptional honor and sought his advice in the shaping of his kingdom in Gujarat. In a very short time, Gujarat became a center of non-violence, learning, and good culture.

“Hemachandra composed several literary works that included many verses. He was also the first one to put non-violence on a political platform. In the field of metaphysics, he was a Yogi. His work Yoga-Shastra, a treatise on yoga, is very famous. People called him ‘Kali-kala Sarvajna’ meaning ‘all-knower in the dark period’. He died in 1173 A. D. at the age of eighty-four. The Jain culture still shines brightly in Gujarat, due to the influence of the literary works contributed by the great Acharya Hemachandra,” Vimal Shah told referring to what he had studied in Jain literature and the information also available on various websites of encyclopedias. Jain doctrine is woven throughout his writings. In accordance with the Jain ideal for monks at the end of their life, Hemachandra fasted to death.

“In 1125 he became the adviser to King Kumarapala and wrote the Arhanniti, a work on politics from a Jain perspective. A prodigious writer, he produced Sanskrit and Prakrit grammars, textbooks on science and practically every branch of Indian philosophy, and several poems, including the Trishashtishalakapurusha-charita (Deeds of the 63 Illustrious Men), a Sanskrit epic of the history of the world as understood by Jain teachers. He was also a logician. Although derivative in many ways, his works have become classics, setting high standards for Sanskrit learning,” he said with certain references, and opined that the inscription on the board would surely shed light on link between the Jain scholar and Sharda University. 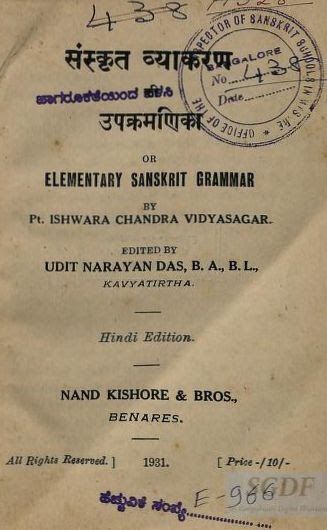 While listening to Vimal Shah, I continue my online search and found a brief reference of Prabhavakacarita, a Jain text devoted to history, composed by Prabhācandra, an acarya of the Svetambara tradition of Jainism in 1277–78. According to it ‘when the Jain scholar Hema Chandra was commissioned by Jayasimha, King of Gujarat to write the Siddhahema, he visited Sharda Peeth for access to previous works on grammar, as it was the only place with a library known to have all such works available’.

I shared the information, but as we both realized that the inscription on board would help further, I translated the related lower part of the inscription, which stated:

“A great scholar Hemachandra was born in 1088 in Gujarat, who earned fame for his intelligence. The Raja of Gujarat (the inscription mentions his name as Jiasamba) had engaged him to his court because of his scholarly abilities. Hemachandra, who wanted to prepare a comprehensive encyclopedia of world religions and languages, sought the help of Raja to get the required literature, which according to him, was available only at the Sharda University of Kashmir. On his request, the Raja of Gujarat sent a delegation to the Capital of Kashmir (Srinagar) and then the delegation members visited the Sharda Devi’s Temple to pay homage. Later, as per royal tradition, all the related manuscripts and other literature was sent to Gujarat where Siddha Hemachandra wrote the book with the help of this literature.”

This inscription nowhere mentioned the visit of Siddha Hemachandra to the Sharda Temple/University, however, it proved a link between a great scholar and the ancient institution.

According to the literature available online, this area in AJK is more famous for its ancient Sharda University known to be a prominent institution of Asia in the Buddhist era. It was once the center of spiritual education for Buddhists and Hindus. The Hindu Pandits and scholars of Sanskrit used to pay their visit at the Sharda University from the far away of the Subcontinent. The Chinese Buddhist monk Xuanzang visited this place in 632 CE and stayed there for two years. In addition to Buddhist studies, this university was a source of learning history, geography, physics, and philosophy. This institution had its own script named Sharda script which was developed in the 9th century.

Sharda University aka Sharda Peeth temple was dedicated to Sarasvati Sharda, a Hindu goddess of knowledge, music, arts, wisdom, and learning. There was a sandalwood idol of Saree Sharda Devi in the temple which however does not exist there at present. The Hindus believe that their goddess was the resident of Kashmir, and that is why they named Kashmir ‘Sharda Desh.’

The amazingly designed building, which now only exists in ruins, is positioned at the height of 11000 ft. above sea level and about 70 miles from Srinagar. It is 142 feet in length and 94.6 feet in width. The outer walls of the temple are 6 feet wide and 11 feet long along with the arches having a height of 8 feet.

The Sharda University had periodically fallen into disrepair after India lost its contact with Sharda Peeth and Krishanganga in the 14th century. It was last renovated by Maharaja Gulab Singh of Kashmir in the 19th century. After the first Kashmir war between India and Pakistan in 1948, the site came under the control of Pashtun tribesmen who invaded the region and then passed over to the newly formed government of Azad Kashmir. The site was heavily damaged in the 2005 disastrous earthquake.

The visitors from India do not have permission to access the Sharda region, given its proximity to the Line of Control. However, foreigners from other countries do not face such restrictions. The citizens of Pakistan including its Hindu population are also not forbidden from visiting this site.

Muslim historian Al-Beruni has also mentioned Sharda University and Temple as famous place of pilgrimage, which he could not visit being difficult to access. British surveyor Charles Ellison Bated, who authored “A Gazetteer of Kashmir” in 1873, had written that this house of worship was already in ruins when he visited the region in the 19th century. Historians say that nearly 50,000 pilgrims used to visit the site, on the left bank of roaring Neelam River until the 11th century. The revered Madhumati River, also known as Sharda or Khutchal River, runs on the southern side of the temple. In ancient times, pilgrims used to bathe in the “sacred” water of the Madhumati River before entering the temple.

Author is a senior journalist and Chief Editor at Sindh Courier, based in Karachi.

Observations of an Expat: Brexit is Back!