The origin of Sindhi language had been an unfathomable mystery inundated by the contrasting views of historians, scholars and archeologists who made their assumptions based on the civilization existent in the ancient Sindh.

Sindhi language while on one hand reflects its aboriginality, has on the other hand evidences that suggest influences by language of the invaders. Historical intrigues to unearth the origin of the language have varying conclusions to offer. Even as its connections with the ancient languages are being worked out scientifically, the language is gradually heading towards oblivion.

The Sindhi parlance has witnessed a transition over the years and there are varying theories related to the ancestry of the language. Historians working hard to fathom the origin of the language have varying conclusions to offer.

Facts and discoveries of Sindhi parlances over the years have launched a debate about the Sindhi language being a derivative of the ancient Sanskrit dialect and there a few historians who believe that it’s the other way round. Dr. Ernest Trumpp is considered to be the pioneer of the theory that Sindhi is a derivative of Sanskrit language. Judging from its vocabulary and roots of verbs, Dr. Trumpp came to the conclusion that “Sindhi is a pure Sanskritical language.” Hindu scholars Dr. H M Gurbaxani and Berumal Maharchand Advani agreed with the theory. But Miss Popati Hiranandani in her book ‘Sindhis: The scattered treasure’ (page 6) has an interesting deliberation to this theory. According to her some scholars confused the words prakrita (meaning = nautral) with the word purakrita (meaning = formed first), which misled them In the same way, she says, due to affinity towards Hinduism, litterateurs like Kishinchand Jetley translated a couplet from Sindhi poet Shah Abdul Latif’s poetry into Sanskrit and concluded that the similarity shows the derivation of Sindhi from Sanskrit. She rightly argues that it could be the other way round too and cites two authorities to elucidate this point. One is Siraj-ul-Haq of Sindh Pakistan who states: 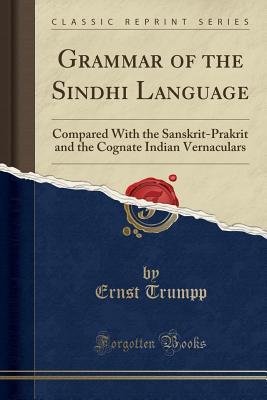 “The history of Sindhi is older than that of Sanskrit and its related civilization or culture are derived from the civilization of Sindh and from Sindhi language . . . . Sanskrit is born of Sindhi – if not directly, at least indirectly.”

The other is an Indian linguist, S. Kandappan who says:

Interestingly, after further studies Dr. Trumpp himself seemed to be doubtful about his findings. Testimonies to this are the remarks in one of his work of arts:

“Sindhi has remained steady in the first stage of decomposition after the old Prakrit, where all other cognate dialects have sunk some degrees deeper and we shall see in the course of our introductory remarks that rule, which the Prakrit grammarian, Kramdishvara has laid down in reference to the Apabramsha, are still recognizable in present day Sindhi, which by no means can be stated of the other dialects. The Sindhi has thus become an independent language, which, though sharing a common origin with its sister tongues, is very materially different from them.”

Dr. Trumpp’s initial theory was first challenged by Dr. Nabibux Baloch. He believes that Sindhi belongs to the Semitic group. Mr. Ali Nawaz Jatoi holds the same view. They point out that there are some words in Sindhi that cannot be found in Sanskrit. Besides, the suffixes added to the pronouns in Sindhi suggest its relation with Semitic languages. The word ‘Sanskrit’ itself denotes that it is a polished or refined form of a language that was already prevalent. The grammarians Patanjali and Panini formed rules and regulations, which came to be necessarily, and compulsorily followed by writers and poets of those days. Thus, Sanskrti was only the language of literature as is evident from works of classical writers. Dr. Baloch states:

“Sindhi is an ancient Indo-Aryan language, probably having its origin in a pre-Sanskrit Indo-Aryan Indus Valley language. The Lahnda and Kashmiri appear to be its cognate sisters with a common Dardic element in them all.”

Sir George Grierson too places Sindhi as a near relative of the Dardic languages (Dardistan is a region near Kashmir).

The origin of Sindhi language had been an unfathomable mystery inundated by the contrasting views of historians, scholars and archeologists who made their assumptions based on the civilization existent in the ancient Sindh, yet another research came to the fore with Sir John Marshall discovering that the earliest Indian civilization was that of the Indus Valley and not that of the Aryans. And both the races were unrelated and had an independent origin and development. Dr. Mackay had also said :

“The seals found in Mohenjo-Daro are the only known inscriptions of the Indus Valley which can give some idea of the people. They certainly had a language of their own.”

The excavations of Mohenjo-Daro have opened new vistas for the study of the origin of Sindhi language. It has been agreed by many a scholars, archeologist and historians that the Indus Valley was occupied by Non-Aryan (Dravidian) people before the Aryan settlement in the Indus Valley. They had a very rich culture and a language of their own. ‘Return of the Aryans’ by Bhagwan S Gidwani also clarifies this fact. According to Bhagwan Gidwani:

“Sindh, along with Bharat Varsha in its entirety, is the most ancient civilization in the world – more ancient than China, Japan, Mesopotamia, Iran and Egypt. He also categorically states that Sindh and Bharat Varsha, were there before Rome was built, and before Jerusalem, Carthage, Greece, Damascus and Istanbul were founded. When Europeans lived in caves, our people along Sindhu river had two-storey houses built of brick and stone, with drainage system, public parks, public baths, art-works, fountains and granaries.”

Excerpts from an article by Ram Jethmalani that appeared in The Indian Express of Sunday February 26, 1995 had some noteworthy insights. He wrote: 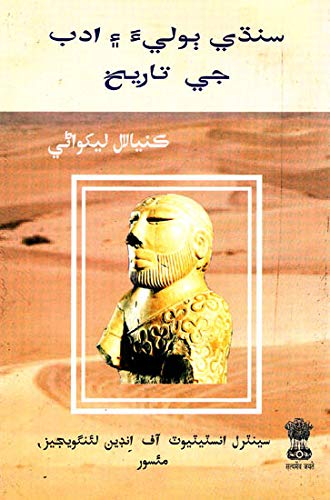 ‘John Marshal and his Indian collaborates made us feel proud that when letters and arts were still unknown to the city of Athens and when scarcely a thatched hut stood on what afterwards became the site of Rome, India could boast of a breathtakingly advanced civilization. Let Sir John speak for himself: “these discoveries established the existence in Sindh (the northernmost province of Bombay Presidency) and the Punjab, during the fourth and third millennium B.C. of a highly developed city life . . . . .’

Scandinavian scholars were the ones who later initiated the study of deciphering the ancient script of the Indus civilization. Their reports greatly helped the scholars of linguistics in studying the structure of Sindhi language. Their reports also assisted scholars in establishing that Sindhi is a non-Aryan or pre-Aryan language having its roots in the civilization of Mohenjo-Daro, , and is related to the Dravidian languages. The Scandinavian scholars after translating the script of Mohenjo-Daro seals, concluded that Sindhi is a proto-Dravidian language and stated:

“The language (that of Mohenjo-Daro) is an early form of Dravidian, called by us ‘Proto-Dravidian’. It appears to be very close to the South-Dravidian, especially Tamil, and decidedly younger than the parent language of all Dravidian tongues.”

Mr. Sirajul Haque also complements this view. According to him:

“Sindhi is one of the Dravidian languages, and has its roots in the civilization of Mohenjo-Daro.”

After deep study of Sindhi phonetics, phonology, morphology and syntax, the peculiarities of non-Aryan origin have been observed in Sindhi, and these non-Aryan peculiarities are similar to those of Dravidian languages. It can, therefore, be said that Sindhi has retained the characteristics of indigenous tongue, which was in use in Sindh before Aryan settlements in the area.

The theory finds support in one of Dr. Trumpp’s latter books, ‘A grammar of Sindhi Language’, in which he wrote:

“We shall on the other had be able to trace out a certain residuum of vocables, which we must allot to an aboriginal language, of which neither name nor extent is known to us. But which in all probability was of the Tatar Stock of languages and spread throughout the length and breadth of India before the interruption of the Aryan race, as all other vernaculars contains a similar non-Aryan residuum of words, which have been already designated as ‘Provincial’ by the old Prakrit grammarians.”

While the ancestry of the language is still a mystery, some reports have led to the inference that the Sindhi has been influenced by various languages that came into existence with the various civilizations that settled in the territories of Sindh. After the Aryans occupied the Indus Valley, their culture, language and religion came into contact with the culture, language and religion of ancient Sindh, i.e. the Indus Valley civilization. An amalgam of both the cultures can be noticed in the Sindhi language.

But there is no doubt that during the long period of history, Sindhi language has absorbed influences of the Old Iranian language during Achaemenian and Sasanian rule. Prakrit and Pali followed this influence during Brahmin and Buddist period. After the Arab conquest in the eighth century, Sindhi borrowed many words from the Arabic language, which became the official as well as the religious language of Sindh for nearly three hundred years. Then came the influence of Persian language, which became the court language from 1351 to 1843.

Instances in the Sindhi vocabulary used in ancient literature also point out towards the influences of various languages on Sindhi (though it can be argued that it can be vice-versa). According to the famous story of the great book, ‘Ajaib al-Hind’, the prince of Alor, a Hindu, asked for religious instructions and had the Holy Quran partly translated into his mother tongue, Sindhi, in the year 883 / 884 A.D. to what extent this tongue was an early form of Sindhi cannot be judged or verified from the existing sources.

Tatsama or Semi-Tatsama, i.e. words that are the same as Sanskrit, borrowed in ancient times or taken recently.

Tadbhava, i.e. Sanskrit words in a derived from. Sindhi is replete with Tadbhava words, but some of them are so changed that they appear as pure Sindhi words.

Deshi, i.e. words that existed before the entry of Aryans in the region, or, perhaps, even after it. They are not taken from Sanskrit, but may have been borrowed from other sources that are native. There are a good number of words from the Dravidian languages too.

But on the whole, Sindhi is rich in vocabulary and is becoming richer with the addition of more words and expressions. While the phonology, morphology and syntaxes of Sindhi have their own uniqueness, they do show influences of other languages.

During this long period of history, Sindhi borrowed plenty of words and phrases from various languages. But the existence of words and phrases of the borrowed stock did not or could not influence much the indigenous structure of Sindhi. In spite of the influences, Sindhi language has been successful in retaining the peculiarities of indigenous origin even today, and draws attention to its origin and ancestry.

But with the fading interest of the community members in learning this language, it remains to be seen whether there would be anyone who can comprehend the research reports over the coming years. Sindhi language is life and blood of ‘Sindhyat’ 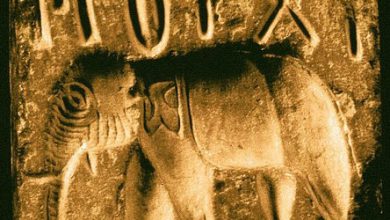 Origin of Urdu Language in India