FWO, Kohnoor Company and others ordered to remove machinery and close their camps as they were operating in violation of permanent ban on mining.

The Court of Civil Judge and Judicial Magistrate Nagarparkar has declared illegal the excavation being carried out in Karoonjhar Mountain by Frontier Works Organization (FWO), Kohnoor Company and Haji Abdul Qudoos Rajar, and ordered removal of machinery and closing of camps for ever.

The court also directed the SSP Tharparkar to register FIRs under Section 188 of PPC against those found involved in such illegal activities in violation of the court verdict and submitting the report on fifth day of every month.

The Civil Judge and Judicial Magistrate Karam Ali Shah released his detailed verdict on Friday in the light of reports filed in the court by all the concerned departments.

On Thursday, the Forest Officer Kashif Shaikh had informed the court that his department has not issued any NOC for excavation. Similarly, the Assistant Director of Culture Department Kelash had submitted that his department has not issued and any NOC and on the contrary, the UNESCO has been approached to get recognized the Karoonjhar Mountain as World Heritage. Livestock Department’s Director Gordhan Das too had submitted similar report stating that Karoonjhar was the sole source of livelihood for humans as well as animals.

The Deputy Director, Mines and Mineral Development, Siddique Mangrio in his report had stated that his department had banned the excavation, however the mining lease documents of Karoonjhar were lying in the office of Director General, who has not yet shared such documents. On this the court had issued notice to the Director General to personally appear in the court along with such documents on January 13, 2022.

Deputy Commissioner Tharparkar, Assistant Commissioner and Mukhtiarkar Nagarparkar failed to submit any report. Advocate Barkat Maitlo, counsel of FWO and Kohnoor Company submitted that the matter was pending in Sindh High Court, where they had filed their point of view. 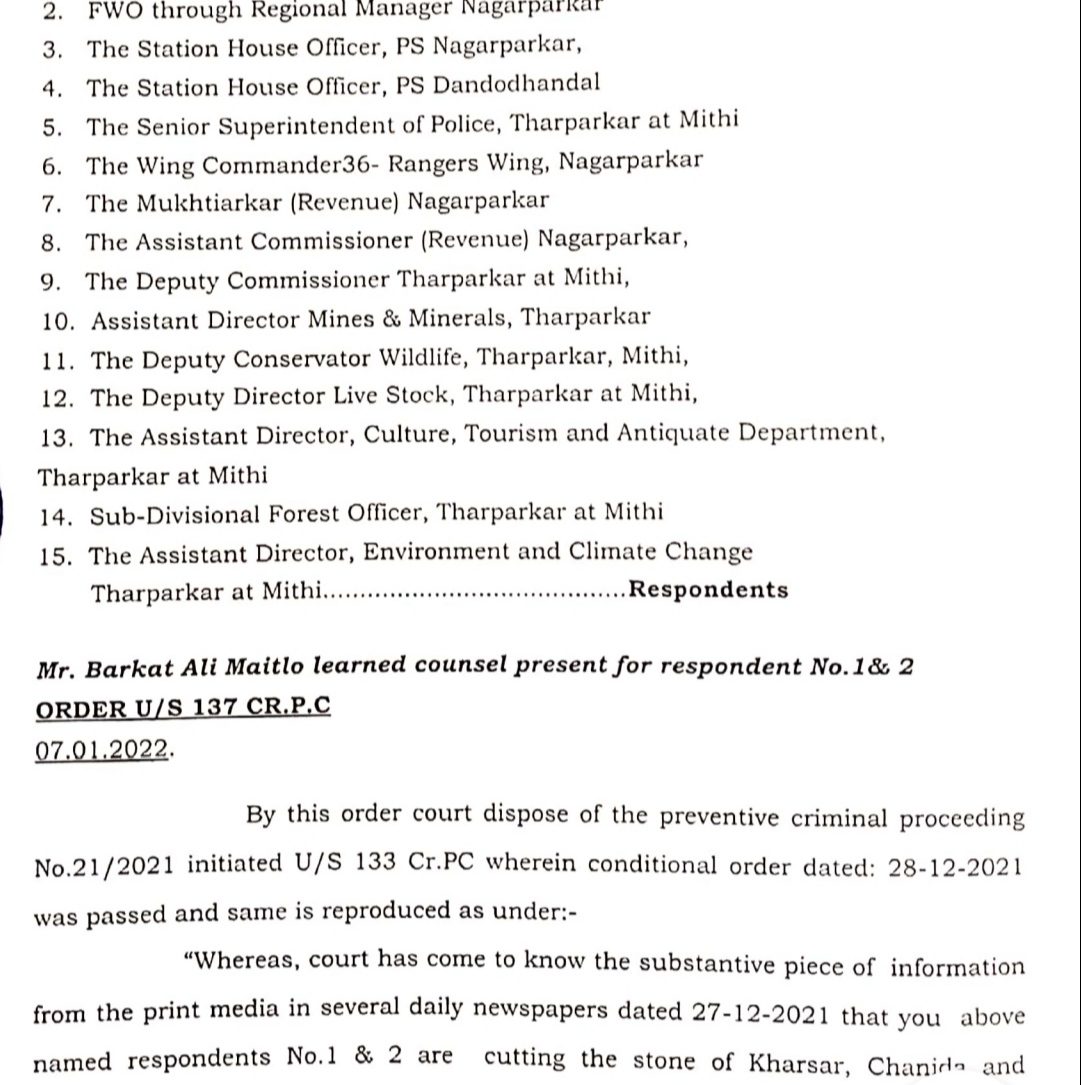 Referring to all such reports submitted by concerned departments, the Judge in his detailed verdict that according to Mines and Mineral Department, the permanent ban on excavation of granite was imposed in 2007 while the companies involved in mining were showing the leases issued in 2011, which testifies that mining of granite was illegal and the concerned department has not taken any action against the violators. The department also failed to submit any lease document, agreement, survey report, jurisdictions and any NOC issued by any department.

“The Karoonjhar Mountain and surrounding areas are home to archaeological sites and ancient places having great historical importance being the national heritage. Lying near the Indian border, the Karoonjhar Mountain is like a defence wall. Moreover, this area is great source of livelihood of the poor people and their animals and the mining would destroy all such resources and deprive the poor of their livelihood,” court said.

The court further said that it is the Karoonjhar Mountain that fills the dams and irrigates the lands during rains besides bring beauty to the area that attracts thousands of tourists every year, which is source of revenue for the local people. “The mining of granite directly affects the economy of two hundred thousand people of Nagarparkar.”