Hundreds of the students have claimed that they have submitted hard copies of their treasury receipts along with their online applications.

From mid-May 2022, the Federal Public Service Commission (FPSC) is holding CSS written test examination throughout the country. In 2022, about 32,019 candidates have filed applications for the CSS exams. Out of this number, 2,415 candidates have been rejected, leaving final eligible number 29,604 for the exams.

The number one reason for rejection of CSS candidates, mentioned by the Federal Public Service Commission, is that the candidates have not attached hard copy of the original treasury receipt of Rs.2200 along with their online applications.

After the issuance of list of ineligible candidates, hundreds of the students have claimed that they have submitted hard copies of their treasury receipts along with their online applications and they have felt a shock to see that their applications have been rejected for not filing copy of treasury receipt.

The screenshot below also indicates that the main reason of rejection of application for the CSS written test is the non-filing of the hard copy of treasury receipt.

Important to note is that in response to the FPSC announcement on Twitter, many candidates have pointed out that they have submitted a copy of original treasury receipt, but their applications have been rejected. 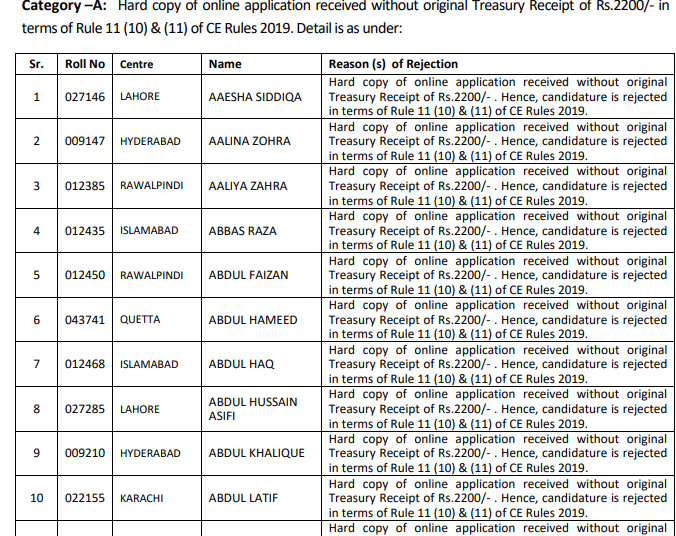 When the candidates claimed on the social media that they have sent a hard copy of the original treasury receipt, the Federal Public Service Commission must accommodate the students instead of rejecting their applications for a frivolous reason that may be the outcome of the FPSC’s own system and personnel handing the online applications.

Here is the link of the Federal Public Service Commission’s website carrying names of 2,415 candidates who applications have been rejected due to different reasons. Hence, candidature is rejected in terms of Rule 11 (10) & (11) of CE Rules 2019. The CSS aspirants and the candidates who have been declared ineligible can go through this link to see the reasons which disqualifies them for taking CSS exams.

In this situation, out of remaining eligible candidates, another seven to eight thousand candidates would not appear in the exams. Thus, the remaining number of the candidates appearing in the CSS exams would hardly be around 17,000 to 20,000 for the year 2022. Thus, before filing online applications, the candidates must check each and every document to avoid to be declared ineligible applicants by the FPSC.