As the fighting has intensified, the UN has documented how Taliban fighters have become increasingly confrontational with the civilian population.

His family, including his eight children, had made do with life under the Taliban. That was until the National Resistance Front of Afghanistan (NRF), an armed opposition movement, tried to wrest control from Taliban fighters in Panjshir, and their once-peaceful province became the front line in an emerging conflict.

“We managed to live with the Taliban on the streets. Some were even nice,” the middle-aged man recalled.

But as the fighting has intensified, the UN has documented how Taliban fighters have become increasingly confrontational with the civilian population, noting one case where intelligence officials arrested a shepherd on 31 May, allegedly for being a member of the NRF. Two days later, his body was delivered to his family “bearing marks of severe beating with sticks and metal rods and of electric shocks”, according to the UN.

Sadullah’s family is one of roughly 150 to have fled from seven villages in the Panjshir district of Shotul to neighboring Parwan province in the last few months. The rising displacement is worrying the international aid community, which fears that the already deteriorating humanitarian crisis in the country will spiral further downward if conflict spreads and more people are displaced in the region, especially as winter sets in.

It isn’t just the crossfire from the two warring sides that is prompting people to leave. Each time the combat restarts, Taliban fighters come to the men in the Shotul villages demanding to know who is shooting at them.

“They would say to us, ‘You’re from here. Some of them must be your cousins and brothers. Tell us who they are, where are they shooting from.’ But what did we know: Our women and children were crying from the gunshots themselves,” Sadullah told The New Humanitarian when asked about the questioning they faced.

The Taliban combatants are also increasingly unfamiliar. At first, they were fighters from the Uzbek and Turkmen ethnicities, then came Pashtuns from the south and west, then, more recently, Tajiks from northern and central provinces.

“They’re not from here; they didn’t realise that if a shot is fired from the hillsides, it echoes through the entire area,” said Mujib, a neighbor of Sadullah’s who also moved to Parwan shortly after the arrival of the fighting forces last spring.

Sadullah said he had tried to make the best of the situation back in Panjshir, but the presence of up to 150 Taliban fighters in their village made resuming normal life impossible.

“We are a traditional people,” he explained. “Our women didn’t feel comfortable going out with strange Taliban fighters around.” 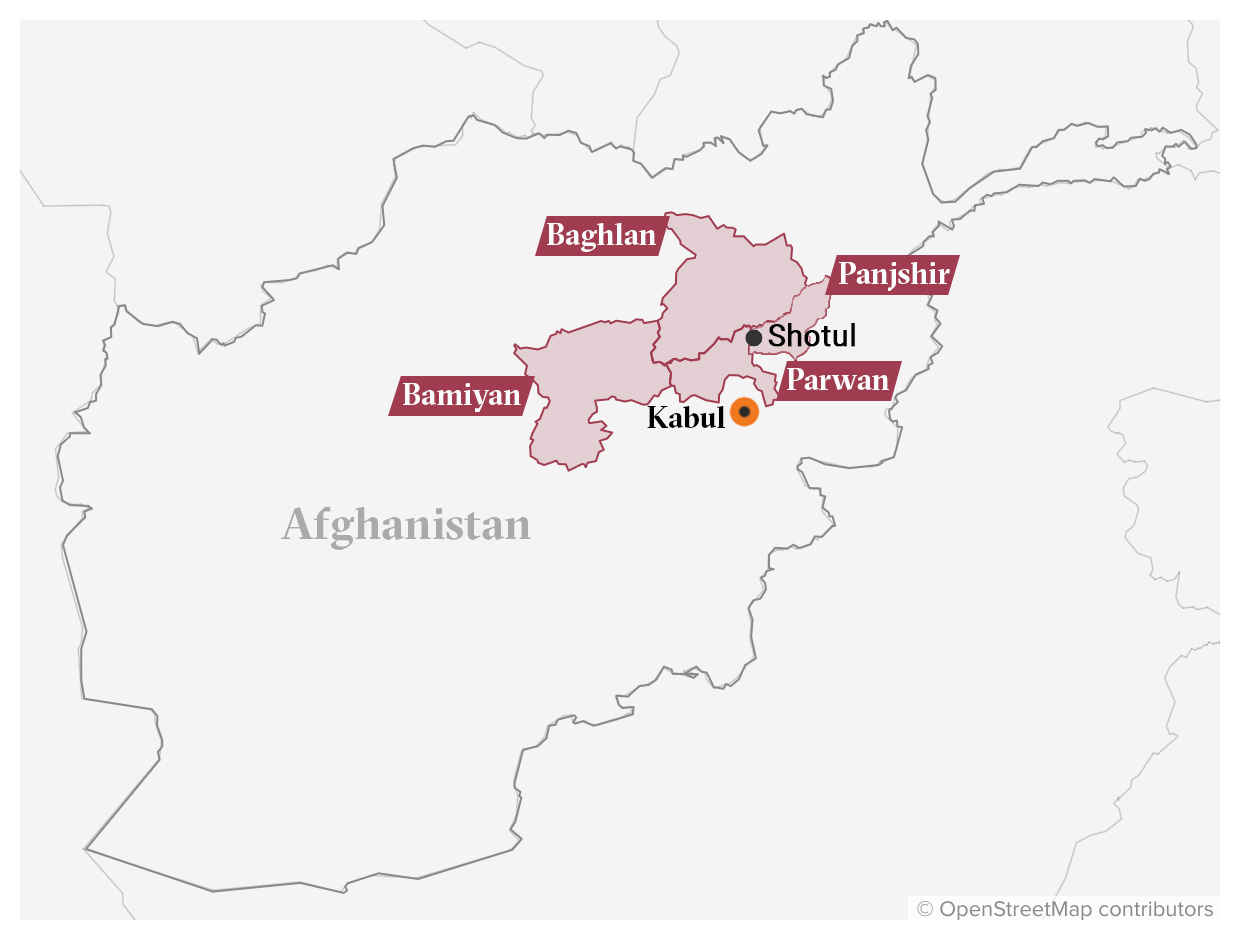 High costs of fleeing to safety

Getting out wasn’t easy.

The few drivers willing to come to Shotul did so at a premium. Sadullah said he had to pay nearly 5,000 Afghanis, almost $57, to hire a driver to take his family of 10 on the one-hour journey to Parwan.

To finance the trip, Sadullah had to pay another 700 Afghanis to transport one of his seven cows, which he later sold for 35,000 Afghanis, just under $400, for his family to live on.

“We couldn’t even pack up our clothes and our rugs,” he said.

Sadullah, Mujib, and Qais – another man displaced from Shotul – said they had to rely on the kindness of neighbors in Parwan to furnish the homes they rent for about 1,000 Afghanis a month.

With the entire nation facing a growing humanitarian crisis as a result of Western sanctions and aid cutbacks, eking out a living has been difficult. Unable to make money off the orchards and livestock they left behind, the three men, and their grown sons, turned to working in the fields and farms of Parwan to provide for their families.

The men, whose surnames have been withheld for their safety, told The New Humanitarian they should have been paid anywhere between 350 to 400 afghanis ($4 to $4.50) a day for their work in the vegetable and wheat fields. But the landowners have also been struggling to make ends meet. And in August, Parwan was one of several provinces to be affected by heavy flooding, which killed at least 11 people and devastated hundreds of acres of farming land in the northeastern province.

Because of this broader crisis, the men have been lucky to clear half the usual cash, and on some days they’re paid in produce instead.

“If they didn’t have the money, they’d give us some wheat or some eggplants, which we’d cook at night,” Mujib explained.

Taking note of the spike in hostilities in Panjshir, the UN sent Richard Bennett, its special rapporteur on human rights for Afghanistan, to visit the area last month to gauge the extent of the escalating situation.

In his 26 October statement to the UN General Assembly, Bennett noted that “clashes are continuing between Taliban security forces and armed opposition groups in Panjshir, and other northern provinces.”

In addition to citing “credible reports of multiple extrajudicial killings of captured fighters”, Bennett said local residents in Panjshir have been met with suspicion and hostility because of the activities of the NRF.

“Communities in those areas, especially Panjshir which I visited and from which I received accounts and interviewed witnesses, are being heavily suppressed,” he said. “Civilians considered by the Taliban to be associated with the National Resistance Front are subject to house-to-house searches, arbitrary arrest and detention, extrajudicial killings, torture and displacement, combined with an information blackout.”

“Communities in those areas, especially Panjshir which I visited and from which I received accounts and interviewed witnesses, are being heavily suppressed.”

The Taliban government issued a blanket rebuttal to all of Bennett’s report, which suggested the Islamic Emirate’s actions amounted to “collective punishment” and called for “a reversal of policies and a full independent investigation”.

In an online statement, the Islamic Emirate’s Ministry of Foreign Affairs accused Bennett of publishing “baseless accusations”, which it said were “contrary to his profession and status”.

The ministry took particular issue with a tweet from Bennett on 23 October in which he encouraged people to email him tips about human rights abuses.

The ministry said Bennett was provided access to “sensitive sites”, including prisons, and asserted that he failed to mention any cooperation with his investigation by Taliban authorities in Kabul, Bamiyan, and Panjshir provinces.

What about Western atrocities?

In their denouncement of the UN report, the Taliban also accused the UN of glossing over the alleged war crimes committed by Western forces that backed the former Afghan government over the last 20 years.

Rights watchers also contend that the accusations lobbed against the Taliban don’t differ that much from what has happened under many different occupying forces over the decades.

Patricia Gossman, associate Asia director for Human Rights Watch, has been tracking abuses by all sides in the decades of Afghan conflict dating back to the Soviet occupation of the 1980s. She said what the Taliban is accused of – particularly in Panjshir and Baghlan, the two provinces where the NRF is most active – are “replications of collective punishment” in Afghanistan.

“In 2001-2002, Afghan militias allied with the US targeted Pashtun villages, carrying out atrocities including killings and land-grabbing and accusing the victims of being ‘Taliban’. Now, Taliban forces target Panjshir and other areas, killing prisoners and displacing residents, claiming they are all ‘NRF’,” Gossman said.

“We just want the fighting to end, and to be able to return to our land in peace.”

Any such actions are “clear violations” of the laws of war, she noted, adding that “longstanding impunity” for such crimes has continued to fuel instability and violence in Afghanistan for decades.

Families who have fled Shotul over the last several months hope the latest iteration in this long cycle of hostilities will come to an end soon. What they long for is to be able to return to peaceful lives in their apple orchards.

“The apples of Shotul are unlike anywhere else, and now they’re all just left there,” Mujib said, addressing two visitors from Kabul who have come to provide financial assistance to their families.

“We just want the fighting to end, and to be able to return to our land in peace,” he said. “We can’t continue to live under the crossfire from both sides.”

The author is Kabul-based journalist

A visit to Daegu, nicknamed as the ‘Apple City’

My Country, I Will Build You Again - Persian Literature Corner