Many earlier excavators did not record the context in which seals were found, so one cannot assess whether they were in secondary deposits or primary deposits.

[The present research deals with Indus Script; Indus valley civilization. The Indus script invented before 2600BC, reflect the fundamental changes in social, political and ritual organization that accompanied the formation and consolidation of cities, when the first inscribed era of economic and political hegemony that would last 700years.This paper also tries to find out where the script was emerged, deciphering dilemma and trying to understand how the script was used and possibly why it disappeared.]

Writing on objects is found in all Indus Period Sites, throughout the streets and houses. But it is also observed that not everyone used the writing. Broken seals, sealing and inscribed pottery would have accumulated with garbage on the streets or have been dumped into abandoned houses. It is also noticed the objects replaced from where it were used, because many earlier excavators did not record the context in which seals were found, so one cannot assess whether they were in secondary deposits or primary deposits. Although recent excavations have defined these different context, and one can sort out the problem of identifying where seals and inscribed objects were used. Like, the major streets leading into and out of city gateway, the craft workshop areas and near the houses in the high walled areas. There are no seals found in pottery manufacturing area, while in the bead and shell working area number of inscribed objects been found. Script was used in different way and several patterns have been emerged. First, only certain people owned seals and few peoples were able to understand. Script was openly visible to general public, and graffiti was openly visible on trade vessels. Writing was used in everyday context as well as religious purposes, but the presence of script on gold jewelry, copper tools and stoneware bangles suggests that only very rich and powerful wrote their names on personal objects. A large signboard from Dholavira shows large writing. The most important recent discovery is that style of writing and carvings of seals changed over time like most inscriptions are small or miniature, also small tablets without animal motifs but with script, comes from the middle to late part of the Harappan phase.

These patterns indicate that leaders, administrators and professional artisans were probably the only people who owned or used inscribed seals, but many of them may not have been able to read and write. Nevertheless, everyone in the society understand the power and authority reflected in writing, use of Indus script throughout the Indus and Sarswati regions reveals a period of cultural and economic integration. The writing would have reinforced this integration and validated the powers of the ruling classes. The most common animal, the unicorn, is mythical and the others animals must have had some important symbolic meaning. On the small tablets, writing and occasional narrative scenes are on miniature scale illustrates public ritual. Thus writing and seals remained important to the political and ritual elites as long as the trade networks cities continued to exist.

It is of mere importance to study the Indus script to look at up the complexities and deciphering challenges, because it might tell us about the insight to past specially towards the great Indus valley civilization that how Indus cities became more strong when the elites, merchants, landowners and traders used Indus script for authoritative’ purpose. It is also significant to study Indus script to know about messages locked on seals in form of different signs and symbols which might unlock the secrets from the past.

Asko Parpola in his book ‘Deciphering the Indus script’ he concluded about Indus script. The Indus script represents logo-syllabic writing. This means that it does not constitute such a closed system of single-valued graphemes as the syllabic and alphabetic scripts, which could be cracked as wholes. Rather, individual signs may be interpreted one by one, and many of the graphemes are likely to remain eternal mysteries. The interpretations presented above, few in number but cross-checked, suggest that the Indus script was essentially similar to the other pictographic scripts created before the middle of the third millennium B.C., that the language of the Indus people was Dravidian, and that they professed a religion that was genetically related to the religions of both the ancient West Asia and the later India. The Harrappan religion emerging from these interpretations is in an interesting way reflected in the Indus pictograms. As iconic signs making use of the picture puzzle (or rebus) principle, they can simultaneously communicate two separate messages, one pictorial, one phonetic. It seems to me that the creators of the script were at pains to invent such iconic symbols that the two messages would be in harmony with each other. Witness the ‘roofed fish’ (pictorial message) as the rebus for the ‘black star’ (phonetic message), both symbols for the deified dark planet Saturn, conceived as riding the slow-creeping tortoise.

According to Ancient History Encyclopedia “The Indus Script is the writing system developed by the Indus Valley Civilization and it is the earliest form of writing known in the Indian subcontinent. The origin of this script is poorly understood: this writing system remains un-deciphered, there is no agreement on the language it represents, no bilingual texts have been found thus far and its connection with Indian writing systems proper (e.g. Brahmi, Devanagari and Bengali script) is uncertain. This is the main reason why the Indus Valley Civilization is one of the least known of the important early civilizations of antiquity”

Indus script invented around 2600BC, but from Neolithic and chalcolithic period artisans painted incised symbols on pottery and other materials goods. Some symbols are simplified picture of plants, animals or sacred mountains, others are abstract geometric shapes, lines, Circles and triangles used for magical protection or to identify the power of vessel, these symbols reflect common cultural perceptions of the natural environment and sacred powers. The use of symbols is also common to all sites of Indus valley. Early excavations at Harappa and Nauws hero suggest there may have been one or more early Indus script. At Harappa there are evidences of multiple abstract symbols but some symbols are identical to characters used in the later Indus script suggesting that they represented the same sounds or meanings. In Mesopotamia writing was invented to keep records of trade around 3300BC and in beliefs of some scholars Indus script shows some similarities with the proto-Elamite Script (3100-2900BC) (Walter A.Fairservis 1986). However, before the invention of writing all these regions had been in contact through overlapping trade networks for hundreds of years. The Egypt developed in response to contacts with Mesopotamian traders or colonists who used writing. The Indus script may have been inspired by contact with Mesopotamia. According to the invention acceptance and eventual adaptation of the Indus script by all of the regional settlements should be seen as a process stimulated primarily by local needs and fulfilled using a culturally meaningful set of signs. Numerous attempts have been made to relate Indus to other known scripts, but only connection with Proto-Elamite Script Susa III, Elan Ivan, which is considered the oldest civilization in Iran, Even this connection is slight and weak. Asko Parpola who has been working on Indus script has concluded that the Indus Script is not directly related to any known writing System. Writing in the Indus valley is first found inscribed on pottery but no site been identified where writing was invented. Most examples of Indus writing come from the excavations of MJD and Harrapa, but some 60 different sites throughout the Indus valley have contributed one or more objects with script. Indus script as known from seals and other inscribed objects, emerged as a fully formed system of abstract signs, and called graphemes. Over 4200 objects have been discovered, but most inscriptions are extremely short.

Computerized studies have helped which sign comes after. Other complications arise when signs are actually joined together to form a compound character. Many inscriptions consist of only one sign: in three cases, the grapheme must represent a word or an idea. Although it is generally agreed that the Indus script is not an alphabetic form of writing, it does not have enough different signs to be a logo syllabic (morphemic) where a single sign can mean a word, a syllable or a sound as this, most scholar thinks Indus script represents a logo syllabic writing system. Where a sequence of sing would represents either a complete word or a sentence. Some other ancient writing systems that have been deciphered begin by using pictographic symbols to represent an idea (ideographs) or a word (logographic) some symbols represents a syllable or a single sound (phoneme). Early logographic script such as archaic Sumerian had over 700 different signs. In Indus script some of the signs do look like pictographs, for example a fish, or a man holding a bow when used individually such signs may have represented idea or words or even entire stories. So the Indus Script combined both logo syllabic and ideographic system at the same time. Third versatility may reflect the experimental nature of the script and its use by newly emerging elites. (Continues)

The author of this research paper is Teaching Assistant, Department of Anthropology & Archaeology University of Sindh Jamshoro.

The story of Raja Veedhi Seths 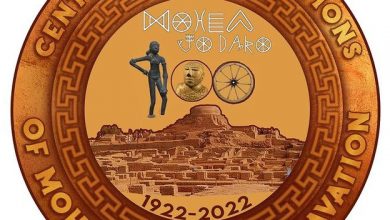