Keeping the promotion of our language in mind, what the parents need to do is that at the end of their matrimonial ad, write a statement saying the candidates having the knowledge of their mother tongue (i.e. Sindhi) will be given the first preference.

There is a popular saying in Sindhi “Jinije ghar mein daana, tini jaa kaana bi aghaana” – which means that people who possess the power of money, can have all comforts of life or can even get the impossible achievements of life.

And, it goes without saying that, America is the only nation in the world which can be cited as an ideal example for this proverb, i.e., it has the ruling power of money. Whichever commodity is known to be American, gets a large market anywhere. Just as the Hindu religion existed in India, since times immemorial, but got publicity and importance only after Swami Vivekananda popularized it in his call to the nation speech in Chicago. Be it the Hare Rama Hare Krishna of the ISKCON stream or Mahesh Yogi or for that matter ‘Osho’ Rajneesh, we Indians have valued them only after they were blessed with an American stamp on them.

That is why, I somehow feel that the protection and promotion of the Sindhi language also lies on the shoulders of those members of our community who live in America, i.e., the citizens of U.S.A. or the Green Card holders!!

By giving a call, I don’t intend to make an appeal to them to financially assist our native organizations or groups, because they’ve already done that in large numbers and unfortunately it is not being put to proper use by us; but I wish to state a different reality.

Most of the parents might be thinking of getting their children married off to settle down, which is being clearly revealed in the matrimonial ad appearing in the newspapers. Keeping the promotion of our language in mind, what the parents need to do is that at the end of their matrimonial ad, write a statement saying the candidates having the knowledge of their mother tongue (i.e. Sindhi) will be given the first preference. For example, the advertisement can be drafted in the following way – “WANTED – A tall, beautiful, slim, homely, convent educated girl for a tall, handsome, well built, Computer Engineer; a green card holder from a cultured family. Dowry no bar, but the marriage ceremony should be pompous. Applicants who can read, write and speak in Sindhi will be preferred.”

As a result of this, not only the proposed candidates but even their parents will make an attempt to learn the language, on the pretext of getting their son or daughter married to an American green card holder. They might also get into the habit of reading a Sindhi newspaper or magazine or book, so that they could be noticed by others around them. Even otherwise, by doing so, none of the parties stand to lose anything. Belonging to a cultured family, fulfilling the eligibility criteria and having a good social standing when mingled with knowledge of the Sindhi language sounds very lucrative and is enough to convince the parents and fix their daughters up for life.

Similarly, a tall, beautiful, convent educated girl with attractive features and handsome dowry, if coupled with the additional quality of having a thorough knowledge of the Sindhi language, is a welcome proposal for the parents of any boy.

I am sure that just as the youngsters in India are on a blind goose chase to learn computer applications, in the same way, if they start giving importance to the inevitability of learning and Sindhi language, whether it comes about due to such matrimonial advertisements published in some of the leading national dailies or due to any other reason, the day would not be far when they would realize that a certificate of merit in the Sindhi language is as important as having a passport in order to settle down in America.

Also that once if the elite class of the society (the Sindhi community) takes an initiative to learn the language, the remaining classes will also start following them, taking it to be a fashion statement. The fact remains that this is an easy, quick and effective method of preserving and protecting the Sindhi language – the burden of which should be equally shared by well-wishers, national and religious leaders and all other members of the Sindhi community. 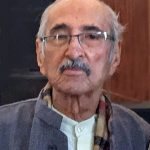 Dr. Satish Kumar Rohra born on 15-Aug-1929 in Dadu, Sindh was a literary expert who did M.A in Hindi and PhD in Linguistics. After partition he settled in Adipur, Kutch area of Gujarat India. He served as Director of Indian Institute of Sindhology, Adipur, where he did monumental work in building & establishing the Institute. He left for Heavenly Abode on 24-Feb-2021.

Spiritual Legacy of Rabia Bibi: Mystics and Mosques of Budhial