Pastoralists in Gujarat depend on time-tested strategies to adapt to climate change. But they are invisible in state policies and remain marginalized.

For centuries, climate adaptation has been used as a livelihood strategy by many communities in India. This includes pastoralists who depend on climate foresight and smart land-use strategies to adapt to climate variability. As environmentalists around the world try to understand traditional climate adaptation methods and couple them with science-based mitigation strategies, it is worth looking at the practices that have helped pastoralism survive for so long.

A large expanse of dry land in western India has supported pastoralism as a land-use and livelihood strategy for centuries. In Gujarat, pastoralism is believed to be at least 5,000 years old and is practiced by people from many tribes. According to a guesstimate shared by a pastoralist from the Saurashtra region, approximately 20 lakh people were engaged in the practice in 2018. Today, approximately 12 lakh pastoralists are found across the state. According to them, shrinking opportunities to access grazing land and forage, combined with a lack of support from the government, are responsible for a reduction in their population.

In 2021–22, the Maldhari Rural Action Group (MARAG), a civil society organization working on the development needs of three pastoral communities—Rabari, Jat, and Sama—that are dependent on common property resources, undertook a 12-month study in the Kachchh district of Gujarat. Through conversations with Rabari and Jat pastoralists in the district, we documented their ways of understanding climate change, the strategies they employ to manage climate variability while rearing livestock, and the use of memory-based narratives to inform migration patterns.

What is the pastoralist strategy for climate adaptation?

We identified four strategies adopted by the pastoralists of Kachchh to withstand climate variability:

A popular saying among pastoralists is ‘we migrate wherever the fodder is’, which also represents their belief that mobility ensures better health for their cattle. This seasonal transhumance between pastures is a strategic approach to grazing to sustain livestock.

Salim Sama, a pastoralist from the Khavda region in Kachchh, elaborates on migration-related tasks and abilities of pastoralists. He describes it as ‘micromanagement’, and says, “Migration means a lot of preparations and equipping ourselves. Four to six pastoral families will make a dang (group) and get ready for the migration. Before starting the journey, the mukhi (leader of the dang) will start thinking about the route and calculating availability of fodder, water, staying destinations, and so on. He finds out which dang is moving on the route that he has planned and decides on one that passes through certain commons, villages, farmlands, main roads, and avoids others. Other factors that are taken into consideration include the availability, type, quality, and quantity of forage; availability and accessibility of water; number of farmers to be dealt with; place for stay and parking of cattle; availability and accessibility of markets to sell milk and manure; and safety.”

Additionally, for pastoralists, mobility and migration are a way of life. Therefore, they memorize every route and link it with the availability of forage, water, markets, and other facilities for the sustenance of their cattle.

Pastoralist Sanganbhai Rabari explains the importance and relevance of memorizing migration routes. “We have to pass through several farms, villages, and their commons. Different types of vegetation—grasses, creepers, shrubs—can be found on the way. We also need to be cognizant of the availability of adequate and good-quality water for our cattle. We avoid the Narmada canal water because it can affect our cattle, causing cold and cough. Moreover, minor changes take place every season based on their requirements.” Memorizing routes are thus a part of the pastoralists’ collective memories that are passed down through generations.

If they find forage and water at a particular destination that will allow them to survive for a fortnight or so, they change their time of movement accordingly.

During migration, pastoralists ensure dynamic use of knowledge and resources. They remain flexible with both space and time. For example, they may choose to change direction if another dang is following the same route at that time. If they find forage and water at a particular destination that will allow them to survive for a fortnight or so, they change their time of movement accordingly. They also use resources in a dynamic fashion. Earlier, Kachchh had mixed cropping with a combination of food and cash crops, such as moong and tuver (pulses), guvar (cluster beans), cotton, and castor. Now cash crops are increasing and pastoralists adapt to these changes as long as cattle feed requirements are met. When they are mobile, they pass through the commons—roads, pastures, waste/barren lands, farms, and forests—and use the available resources in a prudent manner, without harming local wildlife species and biodiversity.

In pastoral livelihood, predicting rainfall (implying drought/flood/rise in temperature) occupies center stage because it is one of the sources that ensures availability of water and forage, which are of utmost necessity for the survival of their cattle. Pastoralist Nagjibhai Rabari says, “It is important to predict rainfall. If it is going to be a drought year, we equip ourselves accordingly.” Referring to the drought years from 1985–89 in Gujarat, he shares that his dang did not return to Kachchh for four years. They continued to migrate from Mehsana district (North Gujarat) to Panchamal and Vadodara (North-East Gujarat) during these years as these districts have deep bore-wells. “Every dang decides to return home only when it gets a message of rainfall. Otherwise, we proceed to other destinations where we get water and forage,” he says. 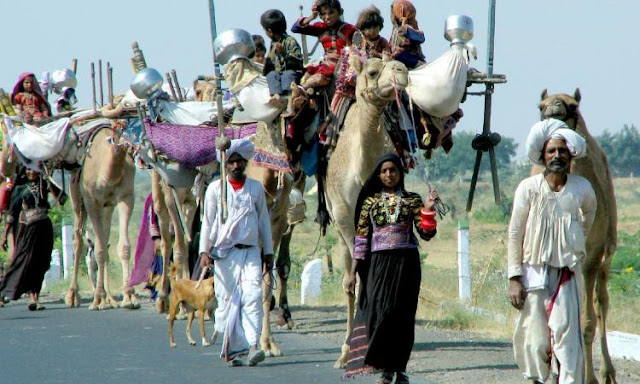 The pastoralists equip themselves for migration by predicting rainfall prior to the arrival of monsoon. Through interviews with pastoralists—both men and women—we noted approximately 40 ways in which they predict rainfall, drawing on their observations of the environment that surrounds them. Some examples include:

The direction of the wind

The formation of dew, fog, and clouds

The location of stars and constellations

The behavior of birds and animals

The spread of salty grass

Pastoralists in Gujarat rear two types of livestock—zino maal (small-sized cattle), such as sheep and goat, and moto maal (big-sized cattle) such as cows, buffaloes, and camels. Breed conservation and development are integral to pastoralism and choices to rear particular livestock are based on experiential knowledge of which breeds fare better in the face of climate variability.

Managing herd population and its quality is another distinct strategy to adapt to climate change. Pastoralists manage reproduction and maintain the number of animals in their herds by considering the climate conditions of the year, health of their livestock, and development of the breed. A pastoral family changes a male of the herd every three years to maintain the quality of the breed and avoid inbreeding.

There is no policy to support pastoralists when small-sized animals are adversely affected or when they die due to natural calamities.

A change in breed choices is also linked to emerging new markets and the growing demand for meat and milk. The growth of dairies in Kachchh has had an influence in determining the selection of different breeds. Jadva village in Lakhpat is a prime example of this. The population of camels in the village is down to 200 from 2,500 in 1964, whereas the population of cows and buffaloes has increased since two dairies—Mahi and Sarhad—set up their collection points for milk in Jadva. On the other hand, with the operation of a collection point for camel milk in Sanosara village near Bhuj, there has been an increase in the camel population as pastoralists have repurchased camels.

A change in choice of maal—from zino to moto—is mainly attributed to the availability of financial support from the government during extreme circumstances. There is no policy to support pastoralists when small-sized animals are adversely affected or when they die due to natural calamities such as droughts, floods, or cyclones. They do however receive financial support for the sustenance of big-sized cattle in the event of natural calamities. Additionally, philanthropic support for jivdaya (animal care) by Jain families is popular in Gujarat and this influences the decisions that pastoralists make about which animals to rear. Special programs by the state government for gauseva (care for cows) also motivate pastoralists to reduce the number of camels, goats, and sheep they rear.

Pastoralists’ sustained links with the market—which includes dairy cooperatives, meat sellers/producers, and manure buyers (farmers)—work as an adaptation strategy that helps them continue their traditional livelihood while dealing with climate variability.

During regular migration, pastoralists maintain a symbiotic relationship with farmers. They get forage from farmers and in turn provide them with manure, which is used as a natural fertilizer. Pastoralists are also employed by farmers to collect fodder and clean farms. We spent a day with a pastoralist, Arjanbhai, and his dang near Modhera town in the district of Mehsana, 220 km from his village in Rapar block. Arjanbhai migrates from Kachchh every winter when the forage dries up, and spends about seven–eight months living and working on the farms of 100–120 farmers in a 30–40 km radius in the area. He says, “We work on the farms of Patel farmers and earn approximately INR 1, 20,000–1, 50,000 each year. Farmers pay us this amount for the manure they get from our livestock. We start making our way back when the monsoon arrives.”

Despite practicing a time-and-climate tested method of livelihood, pastoralists struggle for visibility in government policies and schemes. Studies on pastoralists and pastoralism confirm that due to migration, pastoralists frequently lack proof of citizenship. For example, their names do not appear on voting rolls and they don’t have ration cards that would enable them to access food from the public distribution system at a subsidized price. As they are a small community, pastoralists lack political clout and representation. They are also denied entry to areas that were traditionally grazing zones and are now protected spaces. Such prohibitions adversely affect the mobility of pastoralists and deprive them of rich, nutritious vegetation and grasses that are quality forage for their livestock and can contribute to a thriving pastoral economy.

Pastoralists’ characteristic strategies of sustainable land use and efficient utilization of resources as well as their mobility and market access showcase their adaptive capacity to withstand climate change. However, their invisibility in state policy, the hostility they face when they use common resources, and the lack of public safety nets in managing increasingly growing climate uncertainties are further marginalizing them. These factors are compelling pastoralists to migrate for longer periods and distances, affecting their livelihoods and socio-economic and political development.

Varsha Bhagat-Ganguly is the lead author of this study, which was conducted for MARAG and funded by Azim Premji University as part of the Research Funding Program 2020. Pastoralists Nagjibhai, Rupaben, Sanganbhai, Gababhai, and Arjanbhai along with MARAG team members Dinesh Rabari, Anu Verma, Kutika Haraniya, Shailesh Raval, Gova Rabari, Sambhai Desai, Neeta Pandya, Shiroma, and Nisha were instrumental in producing this study. 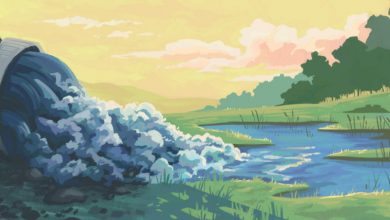 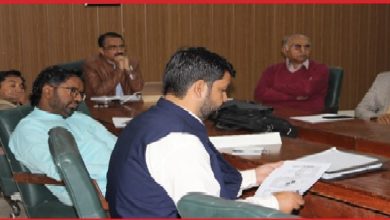 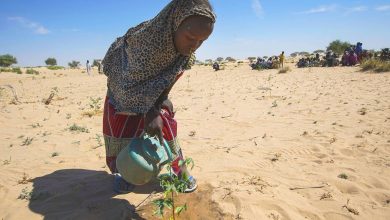 Large parts of world drier than normal in 2021