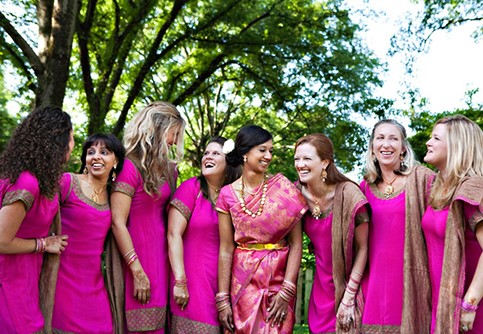 There is a new trend growing among India’s middle classes. They’ve started to employ white Western girls to hang out at weddings, doing various weird things. Jobs can include anything from greeting guests while dressed as a London Beefeater, to leading the bride and groom’s wedding procession on the back of a horse, to being a human statue.

Look closely…these girls are so beautiful, dancing their hearts out – White or Spanish?  And scantily dressed, they are dancing on the pole! No, no … You are not in a Mumbai Night Club. This is the noisy party scene, at a posh wedding ceremony in Bandra, Mumbai.

Welcome to the weird and wonderful world of “White Girl Jobs” thriving in India. Every backpacker who’s wandered the pavements of Mumbai will have encountered the overly friendly young men lurking round the Leopold Cafe trying to scout random travelers for “starring roles” in upcoming Bollywood blockbusters. This is already kind of old hat. Watch any recent Bollywood film and in almost every dance, club, or party scene there will be a group of white men or women inexplicably placed amid the pros, looking lost and bewildered.

But now there is a new trend growing among India’s middle classes. They’ve started to employ white Western girls to hang out at weddings, doing various weird things purely because they—we—are white and Western. Jobs can include anything from greeting guests while dressed as a London Beefeater, to leading the bride and groom’s wedding procession on the back of a horse, to being a human statue.

Or, in my friend’s case, handing out drinks while dressed as a table—then standing there waiting to have the empties deposited back. It really is as interesting and embarrassing as it sounds.

Nevertheless, it pays well, and in many senses this is the whole point. It is impossible to ignore the uncomfortable racial and post-colonial undertones at play in my situation. For whatever reason, affluent Indians seem to place a premium on pale skin, and anyone rich enough to pay for ethnically white people to work as living furniture at their weddings is seen as kind of a big deal.

Back in the days of empire, no colonial Indophile worth their salt would have been without their harem of Indian entertainers. From snake charmers to sitar players, imperialists loved to surround themselves with what, to them, seemed exotic. Today, the roles have been reversed—an irony I mulled over as I stood there, laden with drinks.

From start to finish, the whole experience is insane. My grandson’s beautiful teacher received a call from a fierce-sounding Eastern European woman whose job it is to approve your pictures and measurements, then arrange a time and place to meet. In the teacher’s case, this was a station right at the outskirts of the city. “Make sure you are there by five o’clock, otherwise no payment!” she was warned. “I mean it, girls. Don’t….mess me around!”

She got there at five and then… nothing. By six, a few more girls had showed up—predominantly sad Russians speaking nothing but sad Russian. By seven, one of the guys who’d scouted her in central Mumbai had arrived, carrying three crappy phones, two of which he was speaking into simultaneously. His name was Pinky. He’d just got WhatsApp, he told me. And could he add me on it?

The next thing the kid’s teacher knew, all the ten aspirants e were being bundled into a white Toyota Van with “TOURIST” printed on the side—like they weren’t conspicuous enough already—and driven off to God knows where. Like, seriously, they had no idea where they were going.

The party of 10 thought they were doing a two- to three-hour job on the outskirts of Delhi but eventually turned up seven hours and 200 miles later in Ludhiana, Punjab.

Times have changed in India….

Lightness of Flying Thoughts - An Artist Pays Homage To A Poet