Today the democratic cornerstone is being undermined by the actions of conservative-minded political parties in both countries– America’s Republican Party and Britain’s Conservative and Unionist Party.

The Anglo-American special relationship is growing closer—but not for the right reasons.

It has been founded on shared values, history, legal structures, trade, military and intelligence links and an unwavering belief in the democratic institutions which underwrite all of the above.

Today the democratic cornerstone is being undermined by the actions of conservative-minded political parties in both countries– America’s Republican Party and Britain’s Conservative and Unionist Party.

They have veered away from the responsibilities of political stewardship to the naked pursuit of power at all costs and tied their fortunes to personalities rather than policies. Both parties have adopted standard bearers (Donald Trump in America and Boris Johnson in the UK) who have become inveterate liars and slanderers.

Of course, in America, everything is bigger and better. And in the case of Donald Trump and his falsehoods, the former president is definitely in the world beater category. According to analysts at the Washington Post, he issued more than 30,000 lies during his presidency. And, of course, there is the “Big Election Lie” with which he is attempting to undermine the electoral system.

Boris Johnson is no slouch in the falsification stakes. But he goes more for quality than quantity. His Brexit lies were notorious. And as Prime Minister he regularly stands before the dispatch box of the House of Commons and rolls out statistics which Britain’s own Office of National Statistics immediately denies. But, of course, his most recent big lie was that there were no parties at 10 Downing Street during covid lockdowns. The police are currently investigating 12 such incidents.

The problem is that under parliamentary rules, MPs cannot call another member of parliament a liar; at least not in the precincts of the Palace of Westminster – To do so is a grave offence and results in temporary expulsion of parliament.  Ian Blackford, leader of the Scottish Nationalist Party in the House of Commons, found this out to his cost.

Slander is also now a common tool of both party leaders. Boris Johnson recently stood in Parliament and accused Keir Starmer, Leader of the Opposition, of refusing to prosecute notorious celebrity paedophile Jimmy Saville. In both Parliament and Congress speakers are protected by absolute privilege which means that they can say whatever they want without fear of prosecution for libel or slander. The result was that Keir Starmer was cornered by an angry mob shouting “paedophile protector.”

Again, Boris is a long way behind Donald Trump in the title for world’s greatest slanderer and generally most offensive ever politician. Prominent on the ex-president’s target list are Joe Biden, both Clintons, Ted Cruz, all the Bushes, Senator John McCain, Mexicans, women, disabled people, Muslims, Republicans who have opposed him, Republicans who have not given him unflinching support, anyone who refuses to believe he won the 2020 elections, all Democrats and anyone anywhere who has dared to issue a discouraging word about Donald Trump.

If one dares to point out Trump’s lies then they risk being subjected to threats of violence and even death by the violent faction of his army of supporters, which brings me to another similarity and difference between the two systems. The similarity is that the political parties behind Johnson and Trump have tied their political futures to the success of their leaders. This is because both have somehow managed to strike a rich vein of discontent with their respective voters.

Support for Trump or Johnson has spelled high office for their supporters. In the case of America, prominent Republican politicians who once refused to speak with Trump are now fawning acolytes. In Britain the public love affair with the scruffy old Etonian with the unruly blonde mop led to a whopping 86-seat Conservative majority in the House of Commons.

Now for the difference, the mechanism for removing a Conservative British prime minister is much easier than America’s impeachment process. It is called a “Vote of No Confidence.” If the House of Commons pass a vote of no confidence in Boris Johnson then he can either call an election or ask the Queen to find another prime minister. Either way, he will be leaving 10 Downing Street.

To secure a no confidence vote in a Tory prime minister, 54 conservative MPs must submit letters calling for his resignation. So far a number have been deposited with the 1922 Committee which monitors the issue. Exactly how many is a secret. A number of MPs have said they are waiting for the results of the police inquiry into the Downing Street parties.

But before that they said they were waiting for a report from civil servant Sue Gray. It is more likely that the big test will be local elections on 5 May. Johnson was chosen Conservative Party leader because he was seen as a vote winner. If the conservatives lose in May, then his support will vanish.

As for Trump, the skies are turning black with the wings of chickens coming home to roost. But the property developer turned TV celebrity turned president turned ex-president has a history of avoiding the long arm of American law. If he succeeds again then The Donald is current hot favorite to return to the White House. 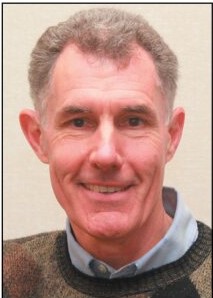 Tom Arms is foreign editor of LDV, and author of “The Encyclopedia of the Cold War” and the recently published “America Made in Britain.”

Married across an intractable border, Rajput Sodhas suffer due to India-Pakistan visa issues