Khharochhan, a settlement along the Arabian Sea Coast in Indus Delta area near Thatta, is on the verge of disappearance due to sea intrusion. Sea intrusion has already submerged the Sokhi Bunder and Khharochhan is also very much on the path to meet the same destiny

Khharochhan, a settlement along the Arabian Sea coast in delta area of River Indus near Thatta gives a deserted look today, but once was the busiest town of the coastal belt. It had Sokhi Bunder at one end and Keti Bunder at the other. But the construction of dams and barrages on the Indus River and inadequate discharge of river water gave way to sea intrusion submerging the Sokhi Bunder, the remnants of which can still be found under the seawater approximately six Kilometers away from Keti Bunder.

Khharochhan is very much on the path to meet the same destiny as the population of the town is shrinking with every passing day. The erosion of agricultural lands has caused the migration of people to the urban areas of the district, while the well-off families have migrated to other parts of the province to make their future secure. Lack of basic amenities like water supply for drinking purpose and reducing resources of livelihood further added to their miseries and compelled them to leave their ancestral abodes.

Khharochhan, which covers an area of 778 sq. km and has a status of taluka (tehsil), while there is also a union council with same name headquartered at Baghan.

The Khharochhan union council has 41 revenue villages (Dehs) and 4385 households according to 2011 statistics of Sindh government. A report by WWF-Pakistan says that natural resource pressures have resulted from insufficient water flow downstream Kotri and at least 117,823 ha of land was lost due to sea erosion, of which 81% fell in the category of ‘totally eroded by the sea’ covering 21 Dehs (cluster of villages) out of a total of 41 Dehs in Kharo Chan, according to Sindh government’s 2004 data.

A study carried out by this scribe revealed that the population of the area has radically decreased from 70,000 to 5000 while around 3.10 million acres of land have been pocketed by sea over the past two decades.

Acute water scarcity during June and July further dents the economic state of the local growers and they keep raising their voice for the due share of river water during the particular season every year.

According to residents Reverse Osmosis Plant (RO Plants) were installed by the government but became defunct after some time due to improper maintenance. They said that owing to inadequate supply of water downstream they were facing this dilemma and Khharochhan was on the verge of outright erosion. They feared if sea intrusion continued as it has been, the days are not far away when Khharochhan would become part of the history only. 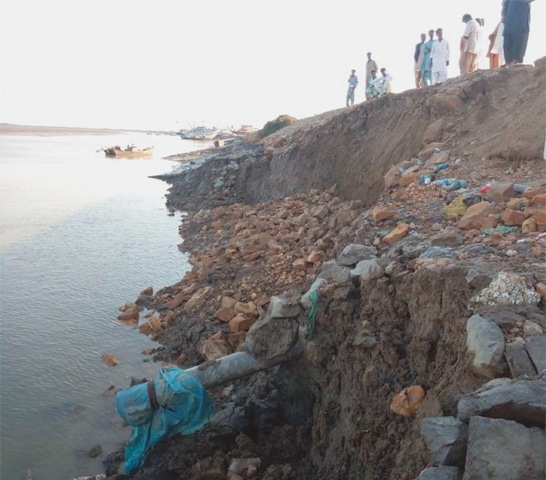 As per international laws and historically, Sindh, being the lower riparian, has prime right on Indus waters. In the 1950s and ’60s the Indus delta was green and fertile owing to sufficient water discharges but now the reduced and often no water flow in the river has destroyed a vast area of agricultural land. If we happen to face a cyclone like that of 1999, it will further destroy the coastal areas and if the erosion continues, Shahbunder will also disappear by 2035, and the sea will reach Thatta city by 2050.

The residents of Khharochhan have urged the provincial and federal government to take precautionary measures to save this area from destruction.

A Christmas story from Van Wert....