Muslims had saved Jews. The people living in Palestine had opened their villages to the destitute Jewish migrants. The district from which the Israeli courts tried to expel Arabs from their ancestral homes, the Sheikh Jarrah neighborhood, was among those places where Jewish migrants were welcomed only 75 years ago.

It is not a Nastya and Nick song on YouTube. It is humanity’s cry against U.S. President Joe Biden, who claims that Israel has the right to self-defense, a pretext the country has used to kill more than 100 children, women and men and to destroy 200 buildings simply because three Israeli people died in violence.

Texas Sen. Ted Cruz, who earlier this year had flown to Cancun, Mexico, amid a weather crisis that left millions in his state without power and water, now amid the death raining on the Gaza Strip asks the Biden administration to send more missiles to Israel.

The French government has banned protest marches against Israel. Former U.S. Vice President Mike Pence, who probably will run for president in 2024, has declared that he stands with Israel.

Austria’s pro-Nazi chancellor Sebastian Kurz flew an Israeli flag over his office to show his support for Israel, which two months ago had criticized him as being anti-Semitic.

Then amid all these statements, a cry is heard from Rep. Alexandria Ocasio-Cortez, the New York Democrat, slamming Biden for defending Israeli airstrikes, saying his statements “dehumanize Palestinians” and could further fuel violence.

In the dark, sick world of vice and blur, there is an Afghan tribal leader ready to send 500,000 people to Palestine as a peace-keeping force. Your heart lights up; you feel that perhaps your heart was never truly frozen to begin with.

A nation’s aid to another reflects its values. Ms. Pressley is right when she says the Americans are peace-loving people and they should not fan a fire.

A memory from Yalta

This joint inebriety of defending Israel no matter what has been passed to Democrats and Republicans, alike, when former British Prime Minister Winston Churchill had passed the imperial key to the Middle East to then U.S. President Franklin D. Roosevelt at Yalta in 1945.

The bait had been set up in 1917 by Arthur Balfour, the British foreign minister at the time, when he wrote to Lionel Walter Rothschild, 2nd Baron Rothschild of Tring, a leader of the Anglo-Jewish community, promising the reconstitution of Palestine as the Jewish national home.

Did Western civilization promise the nearly-extirpated European Jewry that they could uproot the indigenous people from their new lands? It must be the case because the U.S. insidiously postponed the United Nations Security Council (UNSC) meeting to Sunday after blocking an earlier meeting so that Netanyahu could squeeze in as much destruction as possible in Gaza.

Western Europe felt they owed it to the survivors of the Holocaust, to which all had turned a blind eye. They had done it before as the Catholic Monarchs of Spain, Isabella and Ferdinand, had decimated Jews in the second half of the 15th century.

In both tragedies, Muslims saved Jews. The people living in Palestine had opened their villages to the destitute Jewish migrants. The district from which the Israeli courts tried to expel Arabs from their ancestral homes, the Sheikh Jarrah neighborhood, was among those places where Jewish migrants were welcomed only 75 years ago.

Biden is off to a disastrous start. For weeks he did not speak to Netanyahu, and when he did, he declared his “unwavering support.”

Thanks to Biden (and his civilization), Netanyahu has now unlimited license to kill children, women and men under the pretext of self-defense.

Biden and his national-security and defense staff are going to be responsible for the Jewish-Arab “clashes.”

“You take my water, burn my olive trees, destroy my house, take my job, steal my land, imprison my father, kill my mother, bombard my country, starve us all, humiliate us all, but I am to blame: I shot a rocket back.”

We can see that a few pure hearts still exist, if we look around carefully enough.

The World of Paradox! 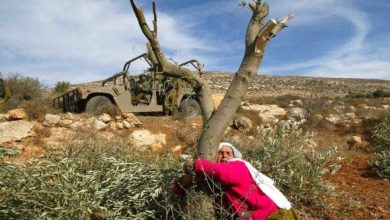 WHERE AN OLIVE TREE BURNS