The small prayer hall was uncovered during salvage excavations ahead of the construction of new neighborhoods in the Negev Bedouin city of Rahat. In the newly found mosque, a half-circle shaped niche is located along the center of the wall pointing southwards (mihrab).

A team of Israeli archaeologists has identified and excavated what is one of the oldest known mosques in the world.

The small 7th-century CE prayer hall was uncovered during salvage excavations ahead of the construction of new neighborhoods in the Negev Bedouin city of Rahat. It is located some two kilometers from another 7th-century rural mosque that was excavated in 2019.

“What is unique in our mosque is the proliferation of 7th-century ceramics on the site, making it one of the earliest mosques in the world,” said archaeologist Dr. Elena Kogan-Zehavi, one of the Israel Antiquities Authority excavation co-directors.

Islam was founded in circa 610 CE. Although the Arab conquest of the Holy Land took place in 636, Islam only became the majority religion in the 9th century. This pair of small rural mosques are key in painting a picture of Islam’s spread at the end of the Byzantine era, the start of early Islam in the Holy Land, said Kogan-Zehavi.

Both prayer halls have been identified as mosques due to their structural elements: a square room and a wall facing the direction of Mecca (qibla), the holy city of Islam. Additionally, in the newly found mosque, a half-circle shaped niche is located along the center of the wall pointing southwards (mihrab).

Significantly, said Kogan-Zehavi, while the previous mosque was emptied of artifacts, the second held a multitude of ceramics that clearly are typographically dated to the 7th-8th centuries.

She said the researchers are starting to put together “a very interesting picture” of the transition from settlement dominated by Byzantine Christianity — including monasteries and significant building structures — to the settlement of a semi-nomadic people with a different, less-permanent building tradition.

What the scholars are seeing is that “Islam came very, very early in the northern Negev and began to live alongside the Christian settlement,” said Kogan-Zehavi.

Aside from the mosque, the archaeologists uncovered a Byzantine-era farmhouse that they said apparently housed Christian farmers. It included a fortified tower and rooms with strong walls surrounding a courtyard. 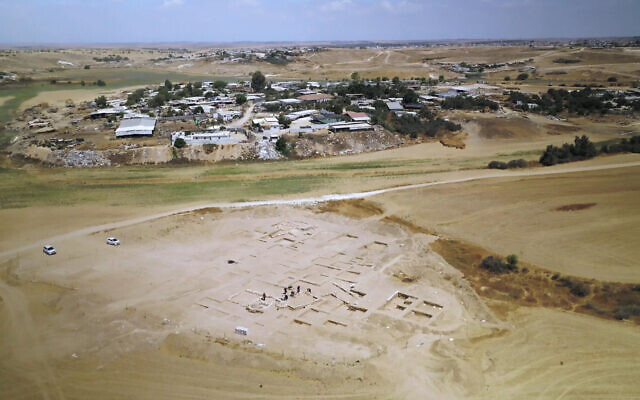 Additionally, “on a nearby hilltop, we found estates constructed in a completely different manner; these were built about a hundred years later, in the late seventh to ninth centuries – the Early Islamic period. The estate buildings, apparently built by Muslims, were constructed with lines of rooms next to large, open courtyards. Many of the clay-lined ovens revealed in the rooms and courtyards were probably used for cooking food. The walls of these buildings were relatively thin and apparently supported mudbrick walls that have not survived,” said IAA co-directors Oren Shmueli, Kogan-Zehavi and Dr. Noe Michael David in a press release.

The “new” mosque was built later in the settlement on Byzantine remains, said Kogan-Zehavi, and in fact was the final building constructed in the settlement. Its construction raises many questions, including: Did the same community of Christians become Muslim? Or was the settlement repopulated by semi-nomadic tradesmen who may have brought the new religion with them from the Arabian Peninsula?

It’s probably a mixture of the two, said Kogan-Zehavi.

“All the questions are seen in the open there on the site. It’s now our job to try to piece together the information to understand what happened,” she said.

Within five kilometers (three miles) of the mosque, she said, there have been excavations of contemporary monasteries that were abandoned in the 7th-8th century. There is no destruction layer, she said.

At the same time, the sprouting of early Islam farmsteads has become visible.

“We can’t know whether we’re talking about just a population of local nomads who came out of the desert, or maybe Christians who took on Islam. The picture is not black and white,” she said. “Are these farmers who believed in Jesus, but moved over to Prophet Mohammad (PBUH)?”

Later, she said, there is a chronological gap in all the sites in the region from the 9th century on. “There isn’t continued settlement and there must have been a catastrophe that we haven’t identified,” she said. People go back to big cities and there is a change of focus of settlement that in many cases lasts until the 19th or 20th century.

The nomadic populations brought Islam to the world, said Kogan-Zehavi, although most of the earliest mosques are dated at least 100 years later and found more from the 8th century. In Israel, other early mosques have been found in the Har Hanegev region, also in the south.

An interesting puzzle in the case of both Rahat mosques is that they were built somewhat far from some of the settlements they presumably served, leading the researchers to question the role of the prayer hall in everyday life. With no lack of space in the open Negev, its placement is likely significant.

“We don’t yet know the connection between the worshiper and the mosque. Maybe it was only in use on Fridays?” wonders Kogan-Zehavi.

This idea of populations in transition is, in many ways, the same trend that is seen in Rahat today. Rahat, the largest permanent Bedouin settlement in the world, was recognized by the State of Israel as a city in 1994.

The residents of Rahat are eager to preserve the two mosques, said Kogan-Zehavi, as the IAA continues to excavate ahead of new neighborhoods initiated by the Authority for Development and Settlement of the Bedouin in the Negev.

“History always repeats itself. The Rahat Bedouin left a nomadic life, settled in cities, and are trying to create a bit of a different life in their permanent settlement. The same thing happened 1,200 years ago,” she said.