Of the many houses abandoned by Sindhi Hindus, author’s grandfather liked this one haveli a lot and chose it as his residence, as Ayub Khuhro had took him from Karachi where he had lined up few houses for him.

Of the many houses abandoned by Sindhi Hindus, dada liked this one haveli a lot and chose it as his residence. 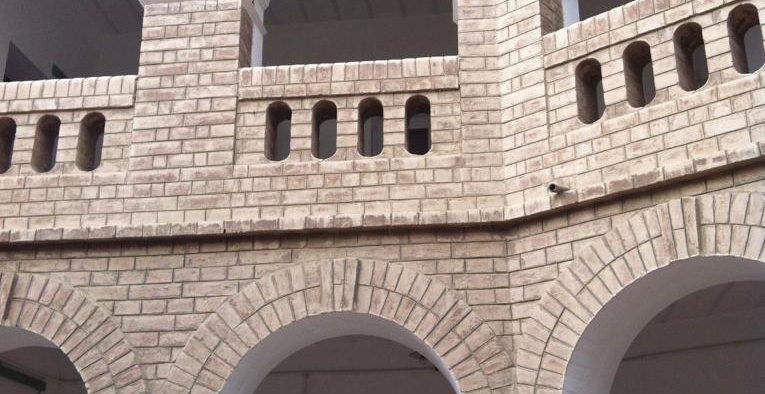 This haveli is divided into two portions and sprawls over 700 square yards. The main building has three floors and the ground floor possesses a big living room with black and white tiled flooring, wooden cupboards, air-ventilators and a very high ceiling which is meant to keep the room cool in cruel summers and warm in winters. There’s a mantle-piece in the living room, commonly called ‘drawing room’ and a fireplace which was regularly used in biting winters of Larkana.

Adjacent to it on its left is a dining room with wooden cupboards, one of which connects to the kitchen so food can be brought in directly into the dining room. On the right side is a bedroom.

These structures open up into winding veranda with beautiful arches adorned with flowery tiles breaking the monotony. 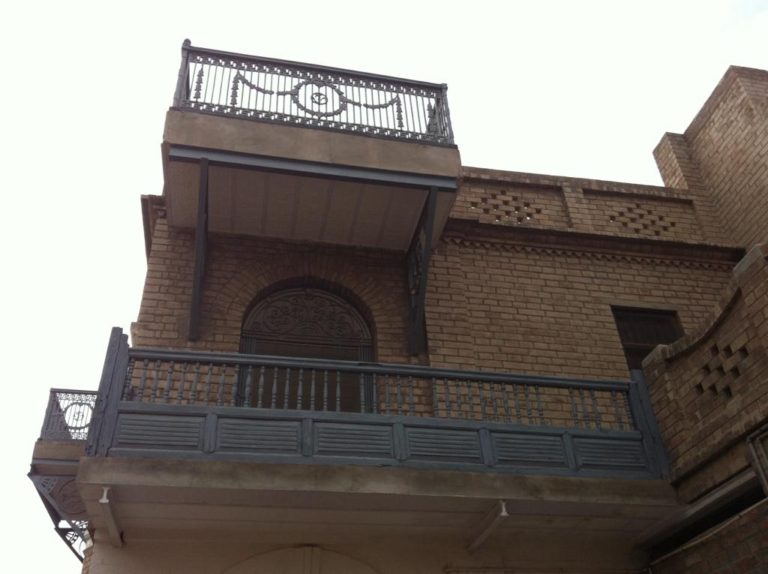 There is a huge courtyard facing the veranda and another small room called ‘office’ near the main entrance of the house. A bathroom with the old-style water tap called ‘hand pump’ and toilet next to it find space in the courtyard. On the first floor are two bedrooms and a small bathroom. These rooms open up into a similar winding veranda with beautiful wooden balcony on one side and iron balcony on the other, with Ohm inscribed on the iron balcony.

The third floor has a big open space, and this is where we would sleep in summers. As kids, we would fall into the laps of sleep while looking at stars above, listening to the gurgling waters of Rice Canal at a distance which was only a few furlongs away from the haveli.

Bolan Mail’s chugging into Larkana station and ubiquitous women singing wedding beats in the nocturnal vastness were regular fixtures. This portion of the house which was called Temazala was again adorned with two beautiful iron balconies. Temzala also had an open portion with rectangular arches with chimney jutting out of the center – one emanating from living room on the ground floor going all the way up and opening into the fourth roof which always remained inaccessible.

Besides the main structure, the house had another big courtyard which according to my parents was a beautiful garden called chaman. It carried this name to this day despite losing its greenery in early 1950s due to some soil issues. In its fold, the chaman housed five servant quarters. 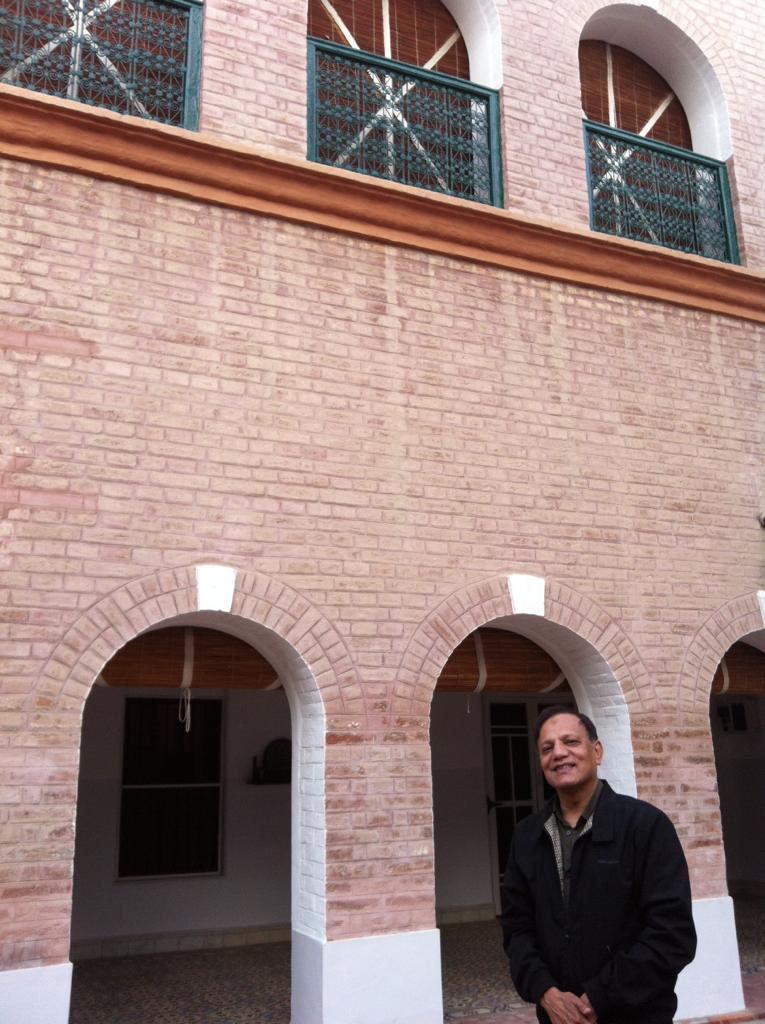 The haveli had two main entrances, one on the chaman side with access to cars while the entrance of the main building with huge doors embedded in layers of three thick walls opens up in a narrow alley with four steps running down the lane.

The building, as is evident from the pictures, was mainly a brick structure which did not need to be painted to save the interior begged for distemper in two years or so. The flooring of main courtyard was that of narrow bricks which crisscrossed in a defined symmetry while flooring of veranda and rooms were of broader bricks.

The doors and windows of the haveli were made teak with straight iron bars. The entrance to the first floor had a beautiful wrought iron door of superior quality, not the modern ones that we normally see these days. 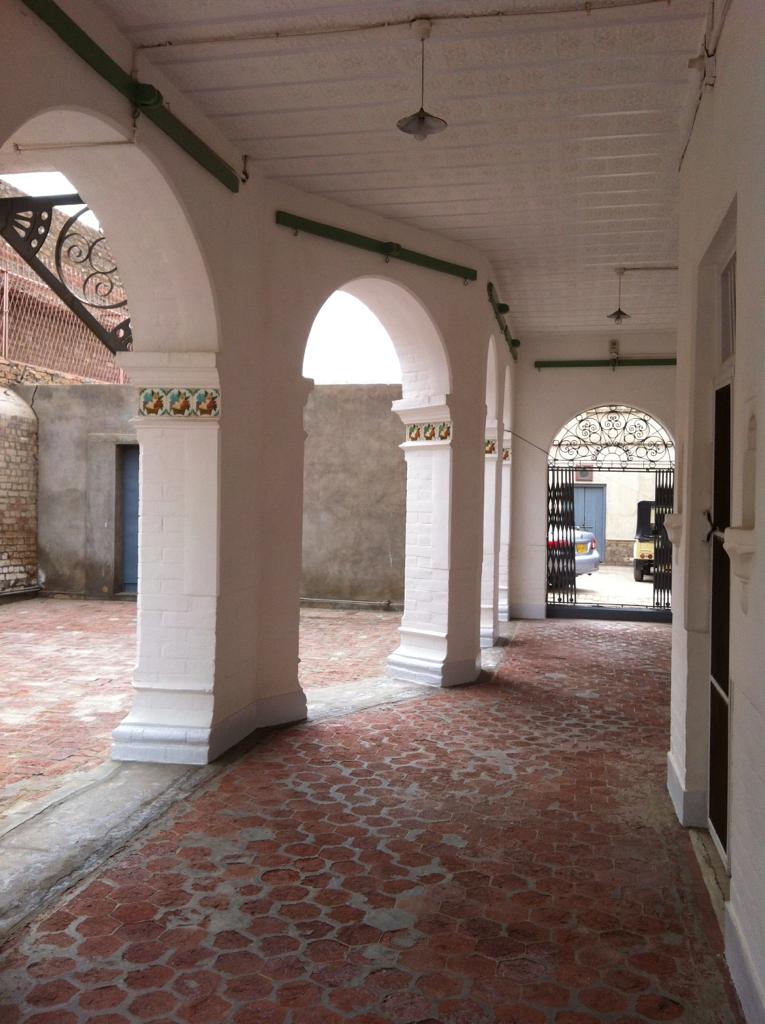 The haveli has been host to many intellectual and political luminaries of Pakistan.

In the early fifties, the haveli did not have access to motors or cars. This was perhaps the last building of the town. The access was only through small narrow serpentine alleys.

Once my grandfather (when he was Governor East Bengal) invited Sardar Abdur Ran Nishtar over for dinner and as Nishtar, meandering through the narrow lanes, approached the haveli, he was stunt by its grace. He averred to my grandfather ‘چوہدری صاحب یہ تو گدزی میں لعل ہے  ‘

My grandfather, however, did not stay long in Larkana and moved to Karachi since he was asked by Jinnah to take over the presidency of Pakistan Muslim League.

My mother Begun Sakina Atiquzzaman, in her late twenties, became the most prominent lady of Larkana by joining politics and engaged in sundry humanitarian and social activities especially at a time when a large number of Muslims from UP were arriving in Larkana to pitch their tents here for good.

Because of my mother’s indefatigable endeavors in providing succor to the needy – both locals and immigrants – she soon assumed larger than life role in local politics.

The haveli then became the central point of her activities and earned the Sindhi title of ‘Begum Atiq jo Bungalo’ (Begum Atiq’s Bungalow).

The haveli is witness to many ups and downs for its inmates. It has served as a citadel at times of political difficulties and has seen birth of our progeny. I now stand solely in midst of chaos all around it.

The unplanned urbanization of Larkana city is casting a shadow of dust on the haveli. Nonetheless, this piece of Hindu architecture and marvel of engineering stands majestically tall on the shores of Rice Canal and in the politically vibrant city of Bhuttos and Khuros seeking overdue recognition from all and sundry. 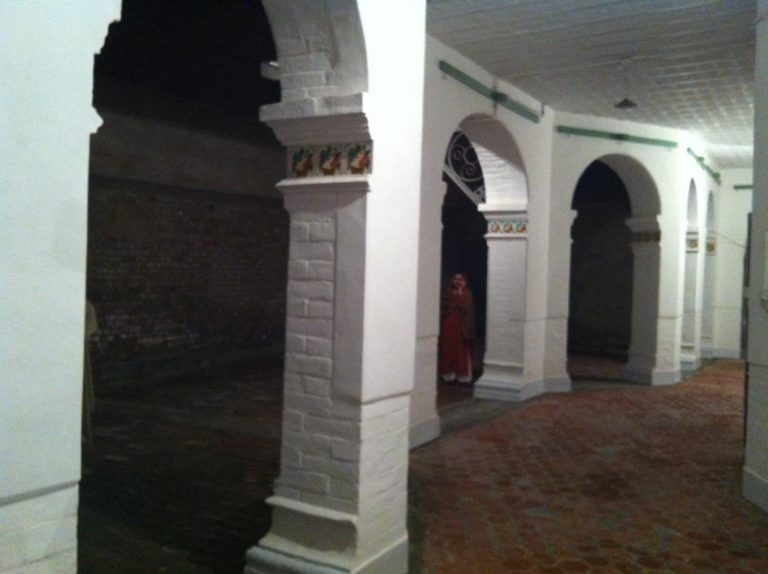 In 1952 my grandfather hosted a dinner at the Haveli which was attended by the leadership of Muslim League, Prominent among those who attended the dinner included Mumtaz Daulatana, Mushtaq Gormani, Sardar Ghazanfar Ali Khan, Ayub Khuro, Qazi Fazalullah etc. The dinner was served in the main courtyard of the building with ‘farshi’ arrangement. According to my uncle the typical ‘Lucknawi’ cuisine served was voraciously consumed and relished by the honorable guests.

On the ground floor, the doors and windows which opened up into the veranda had colored glass panes which gave colorful and cool ambiance to the rooms below.

According to our old servants, the reason why the haveli never encountered any peeling off paint, which pucca buildings in in the interior of Sindh continue to face due to salty soil, was because of the owner of the house. He himself was an engineer by profession and had spread out coal and drums of honey in the foundations of the building to avoid the menace of color.

To this day, the haveli has thankfully not faced this issue.

The credit for the maintenance and upkeep of the haveli goes to none other than my maternal cousin, Ahmad Faruqui, whose penchant for old buildings knows no bound. He himself lives in Larkana in another beautiful haveli called Toolani House built in 1930. Ours is a year older.

The haveli’s unique architecture is an amalgam of both Islamic and Hindu character.

The Egyptian Belly Dancing Sisters with a Secret Jewish Identity 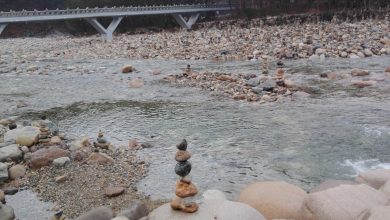 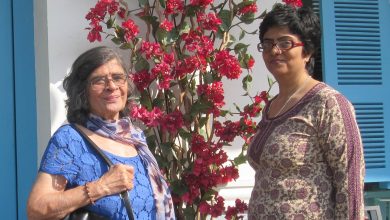 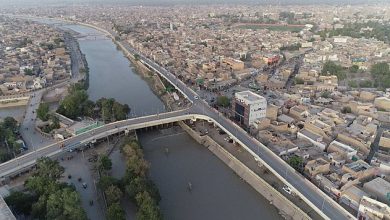 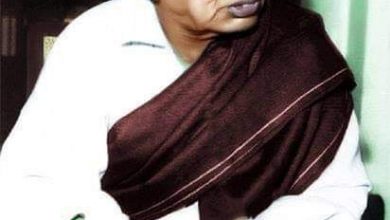 A glance at the painful journey of Qazi Faiz Muhammad