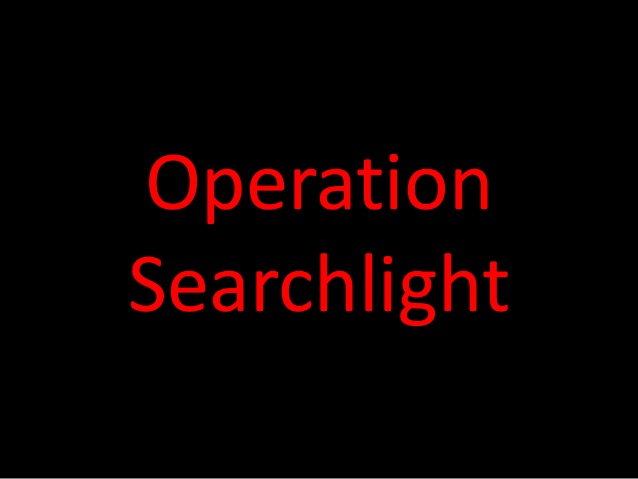 The article is a piece, recalling the aftermath of Dhaka’s Operation Searchlight of March 1971.

This day fifty years ago on the 4th of April 1971 I left Dhaka, my janmobhumi (Birth place) with mixed feelings. I flew out with a heavy heart for leaving behind my friends, my cherished memories, the streets, the lanes which I called my own, not sure if I would ever return and be recognized. There was also a feeling of relief of escaping from the atmosphere of fear I had been living in for sometimes, being the other and becoming a target of reprisal. I had also seen firsthand the scenes of the former Iqbal Hall, Shakhari Patti and the bodies on the streets. I was also told of the madness that took place in the university quarters.

I landed in Karachi after a long detour around Colombo and stayed there in a hotel for two days before flying again to Islamabad to live with my brother who was the Commandant Police Training College Sihala, Rawalpindi. My parents joined us a couple of weeks later. In Pindi I was struck with the smugness of the top Bureaucrats as if all was normal and things under control. They would be surprised when I told them what I saw.

To pursue my studies I soon left for Lahore and joined the Engineering University Lahore and it is here that I met somebody from Gregory’s the first time. It was Jamshed and his elder brother Khurshed. The university would mostly remain closed and I would be spending more time in Rawalpindi. Friendless and bored I would spend more time in the USIS and BC libraries and listening to BBC which was my only source of reality being in Pakistan. However, during this time, I don’t remember how, I bumped into Akhtar Mateen whose father was in Pindi with the Atomic Energy Commission. I visited him several times but hardly discussed events in Bengal.

Soon it was December and the surrender in Dhaka. There was despondency and tears all around in Pakistan and also I could hear the cheers and jubilations in BD via BBC. I cried for my beloved land and its deliverance. In between we were also getting the news of the infamy that was taking place on the portion of the population to which I belonged. I met Mateen once or twice after December then he suddenly vanished to emerge in Dhaka. After December we were visited by Ishtiaq and Kochi in the University hostel in Lahore and that was the last time I saw them in Pakistan.

Soon Bhutto took over and Mujib was still in Pakistan. I was in Pindi Sihala with my brother when one day as fate would have it we learnt that a VVIP prisoner was being moved into the rest house of the Police Training College Sihala. Sure enough it was Bogobondhu.

The rest house was not far from the Commandant’s Bungalow and I had stayed there a number of times when the Bungalow was being reconstructed. It is quite possible that we may have shared the same room.

I was quite excited on seeing Mujib so close and often I would train our telescope to see him during his walks late in the afternoon. He would be in a long overcoat due to the chill of the winter and in white pajamas taking slow walks up and down in the lawn of the rest house. Finally one day we were told that Bhutto visited him one night, they had a long talk and a couple of days later Bongobondhu left for London. Later I spent hours listening to running Commentary on BBC of his landing in Dhaka. I cried once again for Bengal, my friends and for missing this moment of ecstasy.

Fast forward eight years later early in the morning on the 4th of April 1979 Bhutto was hanged.  Some say it was the strike of the first omen to be followed by others. Two days later on the 6th of April we had our wedding in Karachi. Although we were quite apprehensive, it passed on without any event.

After all these events I visited Bangladesh for the first time in 1989. It was like a home coming to be among my friends and my haunts. But those streets and those houses somehow felt strange. Although I have been to Dhaka a number of times since then but with every visit the city felt yet stranger. I guess it was time to move on.

But O’ 4th of April how can I forget you.

The author Irteza Hasnain is a graduate of Engineering College Lahore, and a retired Engineer who lives in Karachi. He had narrowly escaped death on the fateful night.