Ūmar–Mārvī story seems to be a very productive and useful tool to build and strengthen Sindhī identity in India even in the 21st century.

In a work of Behram Tariq (Tariq 1996: 83), it is mentioned that the eminent historian of Sindh, Sayed Mohammad Tahir Masyani, composed the tale of Ūmar and Mārvī in verse in Persian under the title Rāz-o-Niyāz. We can risk a statement that the existence of the story written in Persian is another attempt that links the story with a higher register of Persian culture, which for centuries also existed in South Asia as another important literary culture propagated by Muslim rulers (mainly by the Great Moghuls). Due to my lack of access to the Rāz-o-Niyāz story, it is impossible to draw more conclusions. With the mention of the Persian version of the Ūmar–Mārvī story, I tend to see a conscious attempt of Sindhī culture to start a dialogue and make links with greater literary cultures.

The story linked to the Great Tradition

The Ūmar–Mārvī story becomes a part of mainstream Indian literature through the strategy of making Marūī the Sītā of Sindh, which indicates that it is not enough for the Sindhī community to continue using this folk story, but there is also a need to place it within the frames of the Great Tradition of Indian culture. This aim is achieved by creating a story with a plot full of considerable analogies with the great epic Rāmāyaṇa. The figure of Ūmar can be understood as Rāvaṇa, who is informed about the beauty of Marūī and incited by Phog. The rejected lover—Phog—who wants revenge is, thus, a counterpart of Śūrpaṇakhā from the Rāmāyaṇa.

Marūī is captured when she gives Ūmar water on his request. The strongest effect, however, is obtained bymaking the heroine Marūī equal to Sītā. When she is imprisoned in Umarkoṭ, she expects death like Sītā suffering Rāvaṇa’s threats in Laṅkā. The spouse of Rāma is the symbol of an ideal Indian woman, virtuous and always faithful. Even in the practical sphere of the cult, the statues of Sītā, installed in temples, are very often made of gold, the purest of metals, which symbolizes the purity and innocence of her character (Pattanaik 2011: 153). This practice seems to be an allusion to the motif in the Vālmīki Rāmāyaṇa of Rāma using a golden statue to represent Sītā at the aśvamedha sacrifice that he performs after he has exiled her from Ayodhyā:

The delight of the Raghus took no wife after Sītā, so that in sacrifice after sacrifice, a golden Jānakī served in the role of his wife. (Rāmāyaṇa, 7.89.4 in Goldman, et al. 2018: 424)

According to tradition Sītā is the incarnation of the great goddess Mahālakṣmī. Identifying Marūī with Sītā means attributing Marūī with ideal features, deifying her and, in this way, linking her to the pantheon of Indian goddesses. Interestingly, along with using modern means of transmission in the form of a comic, the traditional process of establishing links with Indian Great Tradition is still in use. Although the mechanisms of reshuffling motives are well-known in Indian culture, it seems that equating Marūī with Sītā is quite recent—the story was published in Surabhi only in 2003 under the meaningful title Sītā of Sindh. It is worth adding that the main heroine of the Ḍholā-Mārū story from Rājasthān, Mārū, who is closely connected with the Sindhī heroine Marūī, is also compared to Sītā; however, we should also keep in mind that it is a typical, standard comparison in Indian culture and poetry. In the poem Ḍholā Mārū rā dūhā, we find the following couplet, which also proves the existence of the attempt made to link the heroine of the desert region with the higher register of the Indian Great Tradition. The heroine’s name is notably mentioned in the verse as Maruī:

[She] moves [like] Gaṅgā, [she is] wise [as] Sarasvatī, [she has] nature and morality [of] Sītā. Amongst women there is no other one like Māruī. 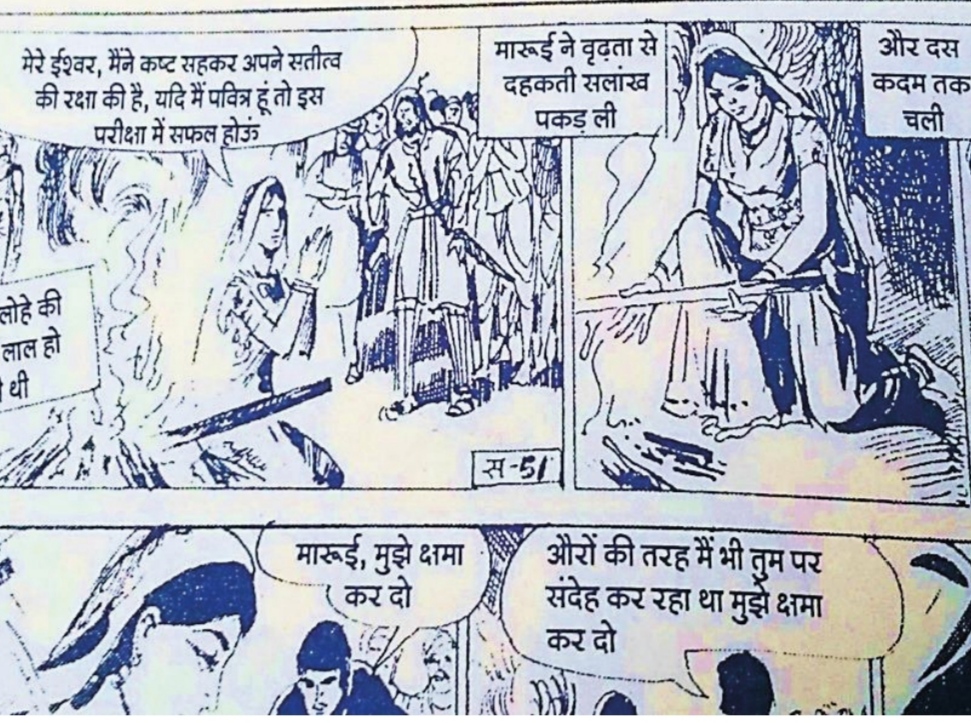 As with Sītā in the Rāmāyaṇa, Marūī, in the Ūmar–Mārvī story, has to prove her innocence as she was staying in another man’s house. She has to undergo a trial as did Sītā. The spouse of Rāma has, in fact, to undergo the trial twice, first by the fire-ordeal (agniparīkṣā). In order to assert her innocence, Sītā says the following words:

Build me a pyre, Saumitri, the only remedy for this calamity. I cannot bear to live tainted by these false allegations. Rejected in this public gathering by my husband, who is not satisfied with my virtues, I shall enter the fire, bearer of oblations, so that I may follow the only path proper for me. (…) Since my heart has never once strayed from Rāghava, so may Agni, the purifier, witness of all the world, protect me in every way.” When she had spoken in this fashion, Vaidehī reverently circumambulated the fire, eater of oblations. Then, with complete detachment, she entered the blazing flames. (Rāmāyaṇa, 6.104.18–19, 24–25 in Goldman, et al. 2010: 457–458)

Sītā goes through the trial successfully, but her innocence is doubted for a second time. She then calls to the earth, in which she was born, and, finally, Sītā is absorbed by the earth (Rāmāyaṇ story, this strategy is, however, not used consistently as there is a difference between undergoing agniparīkṣā as in the Rāmāyaṇa and holding a hot piece of iron (cf. also a version of the story in Komal 1976: 28).

The latter seems to be rather an elliptical trial of fire, but still this is a worldwide chastity test. In other versions of the story, the link with the Rāmāyaṇa is more evident—the earth opens and absorbs Marūī (Khemānī 2003: 49). Nevertheless, the Ūmar–Mārvī story reassures the universal rules in Hindu culture that through protection of women’s innocence, the honor of the entire community is saved.

Marūī, like Sītā, is praised after proving her innocence. In the Rāmāyaṇa, when Sītā is absorbed by the earth, the gods shout:

In the Ūmar–Mārvī story, when Marūī successfully endures the trial people from her village shout, “Glory to Satī Mārūī” (Surabhi 2003: 84). Suddenly, Sītā of Sindh becomes Satī. This is noteworthy because it provides another example of the process of deifying the most prominent representative of Sindh— a woman ascending the funeral pyre of her husband—Satī—is deified and, after her death, she is worshipped as a goddess. Although, in the case of Marūī, she does not enter the fire because of the death of her husband, she is associated here with a Satī woman. It seems that the reason for this association is not only the contact with fire but a general understanding of Satī as ‘the good and virtuous woman’.

Notwithstanding, the great popularity of the cult of Satī has survived up to today, particularly in Rājasthān, which has become its major stronghold. According to Noble and Sankhyan, “the strength of the institution of satī in Rājasthān is clearly related to the Rājpūt presence in the area.

The practice fits well with medieval Rājpūt conceptions of chivalry and honor, and has been particularly embraced by the Rājpūt community” (Noble, Sankhyan 2001: 345, 372). Rājasthān is the place where the literary magazine Surabhi is issued as well. This is thus another way in which Marūī is deified and we see here a double association with holy women: Sītā and Satī.

It is noteworthy that all the forms in which the Ūmar–Mārvī story functions analyzed in this paper prove that traditional mechanisms of how a story is given a higher rank (the recognized one) by placing it within the frames of the mainstream tradition are still valid and can still be seen nowadays. It is notable that the community of Hindu Sindhīs still feel the need to make reference to Hindu terminology and panIndian, well-defined, cultural codes, such as the figure of Sītā or Satī, in the process of retelling their local story. The eclecticism of Sindhī culture facilitates this process as well. In regard to the Sindhī language, Asani explains this phenomenon in such a way:

Linguistically, Sindhi has been developing in different directions in the two countries. Sindhi in Pakistan has been heavily Perso-Arabised to project an Islamic identity, while Sindhi in India has been drifted toward increased Sanskritisation in conformity with general pan-Indian trends. (Asani 2003: 640)

Summing up, we can say that the Ūmar–Mārvī story seems to be a very productive and useful tool to build and strengthen Sindhī identity in India even in the 21st century. It assumes new forms but the content is old—it gets reinterpreted in such a way that the dialogue between peripheral, local and mainstream cultures can be continued. As a result, the Sindhī community in India has their own Sītā of Sindh. (Concludes)

Click here for Part- I Part- II and Part- III