Folk tales may be specific to a region but they have a certain universality. The essence in such stories is so human that a man from one culture can easily relate to the folk tales from other cultures.

Folk tales may be specific to a region but they have a certain universality to them. The old myths and folktales of various cultures seem to have a format. Like a screenwriter formats a screenplay or a designer outlines an illustration, similarly, the folktales have a definite format to which they comply. The ambitious characters, larger than life drama, natural-law-defying phenomena or in some cases, natural yet so ill-timed (that it results in tragedy), they all form different elements of folktales. One thing is for sure, they may or may not be believable in today’s rational world, but they convey a true emotion. The essence is so human that most of the time, a man from one culture can easily relate to the folk tales from other cultures. 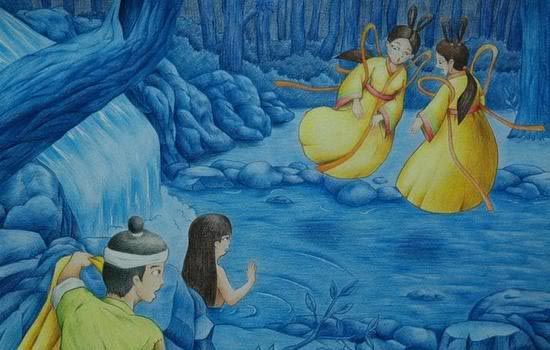 South Koreans deeply value their traditions and their roots. The customs and basic etiquette of performing tasks matters a lot so it’s fitting that folk tales are also an important part of the culture. Stories never fade. They transcend the dimension of time to become immortal, in one form or another. Folktales carry the souls of people. Folk tales are stories of the people by the people. Passed on from generation to generation, they educate and entertain the masses. Korean folktales have a number of miraculous or fanciful elements which would, in filmmaking world, put them in a fantasy genre. Whereas Sindhis are, in general, though romantic in an idealistic sense of the word, more rooted in the apparent reality. Love is the only magic they know and oftentimes, God is miraculous and kind enough to interfere in the worldly events (Deus ex machina in filmmaking; indicating supernatural or god’s interference for sudden change in the course of events). Best known Sindhi folktales are tragedies from ‘Shah Jo Risalo’, a poetic anthology of love stories by famous Sindhi Sufi saint and poet, Shah Abdul Latif Bhittai (1689-1752). His poetry gave birth to the popular ‘Seven Queens of Sindh’. In film, they would have a touch of Italian neo-realism.

One can draw parallels between Korean and Sindhi folktales. What is interesting to note is the constant search for a bride is the priority for many characters in the stories. Sometimes, she appears in the form of a snail or a lady or a fairy. And it either ends with ‘happily ever after’ or in a tragedy (like all stories do). But it’s not all black and white. The circumstances differ, though the climax does not.

The popular Korean story of ‘Woo rung gak si’ (the snail lady) tells about a snail which turns into a lady. The narrative begins with a man finding a snail and bringing it home to eventually discover that it’s a woman with whom he, later on, marries. He’s then challenged by a king who wants his beautiful wife and eventually wins (with the help of his father-in-law Dragon King’s fantastical powers) and donates the king’s wealth to the poor, to end the story.

If the Dragon King’s fantastical powers were not impressive enough, we have the tale of Sassui Punnhun in Sindhi folklore. Sassui, a Sindhi laundryman’s (adopted) daughter and Punnhun, prince of a Balochi tribe fall in love and plan to get married. Punnhun’s brothers are against the idea of a prince marrying a laundryman’s daughter so on the first night of wedding celebrations, they get their brother intoxicated and carry him back to their hometown. The next morning, Sassui, out of anguish of parting with her lover, runs barefooted to Punnhun’s hometown. Crossing the miles of deserts and valleys, shepherd tries to sexually assault her. She runs and pray for God to hide her. The land tremors and splits and Sassui is buried beneath. When Punnhun wakes up, he does the same and on the way, hears about Sassui’s fate. He bemoans the same prayer. As it is answered, Sassui and Punnhun are buried under the valley together.

Both tales use the same character, which is humane and weak, yet when faced with unsurmountable odds, is helped by the superior forces. What’s interesting to note is that Sassui Punnhun’s story may be a tragic one but the union of lovers was inevitable, even in death.

The similarity of themes in Korean and Sindhi culture is astounding. The characters are so ordinary yet the circumstances make them do extra-ordinary things and become immortal. Just like Shimchong, a blind man’s daughter sacrificed herself for her father’s vision and in turn, eventually, became a king’s wife and reunited with his father. Similarly, Marvi is taken to the palace by King Umer in Tharparkar but refuses to marry him even upon promises of lavish lifestyle as a queen. Eventually, Umer realizes and honorably, sends her back to her town.

“It is not the custom of Maru folk.

To exchange kith and kin for gold.”

The importance of family relations is prominent in Korean and Sindhi folktales. Folktales in both civilizations, which impressively boast of more than 5000 years of rich history, are quite similar in terms of using ordinary characters and transform them through fantastic experiences into a better human or rich and successful. As much as the final outcome of their struggles matters, the journey is even more interesting. Characters like Shimchong and Marvi who sacrifice yet stay focused on their goal, or characters like the man in the snail lady or Punnhun who find eternal love are only a few of the many characters which have survived centuries of storytelling from generation to generation. And better yet, in today’s modern world, they remind us of the most basic human emotions and give us a reason to celebrate their epic storytelling and to celebrate life.

Rahul Aijaz is a young Pakistani journalist and filmmaker. He is Director and Producer of ‘A Train Crosses the Desert’, a short Sindhi movie, globally acclaimed and screened in ten International Film Festivals.