Sikh and Hindu monuments, especially samadhis, mark the landscape of Pothohar. These samadhis of Hindus and Sikhs are believed to have been constructed during the Sikh and British periods.

The famous ones are located at Dera Bakhshian, two samadhis in Gulyana in Gujar Khan, and a samadhi on the Bagh Sardaran Road in Rawalpindi and Than Singh Samadhi at Kot Fateh Khan, Samadhi at Bhagpur village, Gujar Khan, the Octagonal Samadhi in Domeli town and Sadhu Ram Samadhi near Domeli, as well as three samadhis at Bhaun – of which one is painted.

Sikh samadhis mainly depict the ten gurus, images of Hindu gods particularly Vishnu and his avatars Rama and Krishna, court scenes and glimpses of colonial rural Punjab. A Hindu Samadhi depicts Hindu gods and goddesses, and scenes from the epics of Ramayana and Mahabharata.

Amongst all the Samadhis in Pothohar, the Samadhi of Baba Mohan Das and Baba Than Sindh are quite impressive and noted for their splendid architecture. The samadahi of Baba Mohan Das is located about 3 km south of Sukho town. It is now in a dilapidated condition. It was one of the most popular shrines of an Udasi ascetic of colonial Punjab in Gujar Khan Tehsil. Baba Mohan Das was believed to have been an Udasi saint venerated by both the Hindus and Sikhs of Rawalpindi district. The landscape of the Potohhar region in Punjab was once dotted with the samadhis and shrines of Udasi ascetics. The Udasis trace their spiritual lineage back to Baba Sri Chand (1494-1629), the elder son of Guru Nanak (1469-1539). They were celibates and like the Nath Yogis used to establish dhuni (campfire) and practised austerities in caves. In fact, there are many caves in Pothohar where both Nath and Udasi ascetics practiced tapas (austerities). Both were celebrated for the practice of Hatha yoga. Some of the caves at Katas Raj were also used by both the Nath yogis and Udasi saints. Tila Jogian, which was the most famous Nath monastery in Pothohar, also attracted ascetics of other religions, particularly of Jainism, Buddhism and Sikhism.

After the death of Baba Sri Chand, the guruship of the Udasipanth was transferred to Baba Gurditta and later to his four disciples Almast, Balu Hasne, Phul and Goinde – who preached the thought and ideology of their mentor in the Punjab and Sindh.

There are also a few other samadhis in Gujar Khan which are located in Dera Bakhshian, Bhagpur and Gulyana. The samadahi in Gulyana lies 1 km east of Gulyana village. On the northern side of the temple is a small samadhi. It is built in a square plan. It is believed that two Sikh notables are buried inside this samadhi.

The second-most impressive and splendid samadhi in terms of architecture is located at Kot Fateh Khan in Attock district. It belongs to Baba Than Singh.  There are three Sikh buildings – a gurdwara and two samadhis – located west of Kot Fateh Khan Village. During the British period, the village was a very sacred place for the Sikh community, for Baba Than Singh was known for his righteousness. The Sikh community used to gather during the fair of Baba Than Singh in the month of Baisakh (April-May). According to the Gazetteer of the Rawalpindi District (2001), 4,000 people attended the fair in 1893. The samadhi of Than Singh is a beautiful double-story building superimposed with a canopy.

Today, the Muslim community of the village also venerates Than Singh and calls him Baba Than and Sultan. They visit the samadhi and seek the blessings of a Sikh saint. This indicates the syncretic nature of the shrine where a saint with dual identities is honored. These dual-identity shrines are widespread in South India and some parts of Sindh. This is the only shrine in the Pothohar where Muslims venerate a Sikh saint.

To the east of the samadhi of Than Singh is an anonymous octagonal samadhi, which is noted for its paintings representing Hindu and Sikh lore. The panels are painted with pictures of various Hindu gods, Sikh gurus and rulers. The ceiling of the samadhi is decorated with raas lila, the dance of Krishna with gopis. Krishna, wishing to render happiness to all the milk-maids who came and stood around him, caused a collective illusion: he made each believe that she alone was dancing with him, while he, in fact, danced with his chosen one, Radha. Three paintings depict Krishna. In one of the paintings, Krishna is shown lifting the mountain Govardhana to shelter his devotees from the storm of the god Indra. The image of Indra with his elephant vihana (mount) Airavata is also depicted on the right side of the panel. One does not find such depictions elsewhere in the Pothohar region.

In one of the panels, one finds a painting of Baba Guru Nanak with his companions Bhai Bala and Bhai Mardana. Two other figures are also shown in this painting. Apart from the painting of Baba Guru Nanak, the Samadhi depicts Guru Gobind Singh and Guru Amardas, Guru Hargobind Singh, Guru Ramdas and Guru Arjan Dev, Guru Har Rai and Guru Har Krishan, and Guru Tegh Bahadur. Apart from the paintings of these Gurus, the samadhi also depicts Ranjit Singh with Naunihal Singh, Kharak Singh and Dyan Singh.

Aside from the Kot Fateh Khan samadhis, one also finds a temple and Samadhi at Qutbal village in Fateh Jang tehsil. The temple is believed to have been built by Lakhi Devi in the memory of her father Narain Singh in 1924. The inscribed slab is fixed on the façade of the temple. It is a square building. The sanctum is superimposed with a square shikhara different from other temples in the Pothohar region, which have octagonal shikharas. Close to the temple is a samadhi which is also built in a square plan. The main entrance of the samadhi is flanked by two niches which were used for placing oil lamps. The interior of the samadhi is decorated with floral designs but most of its paintings have now been damaged.

The samadhi architecture of Pothohar is greatly inspired by Mughal influences. The domes, arches and even the false jharokhas all reflect such Mughal influence. Most of the samadhis were built during the Sikh and British periods. Earlier samadhis built during the Sikh period were grand structures crowned with ribbed domes. Later samadhis erected during the British period were all simpler structures, crowned either with shikhara or squat domes. The art of paintings also declined in the British-period samadhis. However, the use of marble door frames in some of the samadhis reflects the opulence of Pothohari Sikhs.

[Excerpts have been taken from the author’s new book “Reflections on the Pothohar Heritage” published by Emel Publications. All photos are by the author]

Sindh’s struggle for abolition of One Unit – VIII 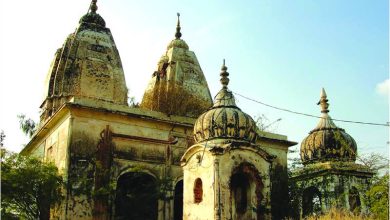 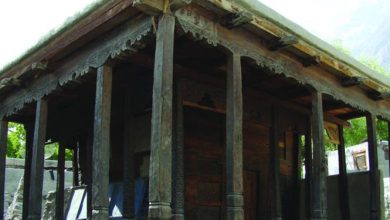 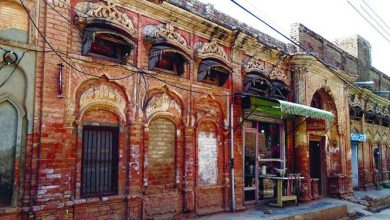 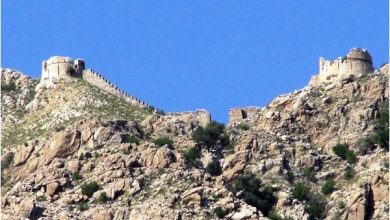